The latest enhancements make the popular NGC Registry more inclusive and even easier to use.

The NGC Registry is a free online platform where collectors register and display their coins and compete against other collectors around the world for recognition and prizes. The immensely popular resource boasts more than 15,000 users, 130,000 registered sets, and 1.1 million registered coins.

To participate in the NGC Registry, collectors add their NGC-certified coins and PCGS-certified U.S. coins to predefined set categories such as Washington Quarters, 1932-1998 or Morgan Dollars, 1878-1921. The set categories have slots for each coin needed to complete the set. When a user adds a coin to a slot, it receives a point score based on its grade, relative rarity, and value. These scores are then tallied and each user’s set is ranked based on its total score.

The NGC Registry helps collectors to organize their collections, set collecting goals and learn from the greatest collectors around the world. It is a fun and useful tool for collectors of all levels.

NGC has made significant upgrades to the NGC Registry over the last year to make the popular platform even better. These enhancements include a refreshed design that seamlessly resizes on all devices, integration with the NGC mobile app, and more.

The announcement that U.S. coins graded by PCGS are now eligible for the NGC Registry is the latest collector-friendly upgrade. Many U.S. coin collectors have both NGC and PCGS-certified coins in their collections and have asked for one place where all of their coins could be organized and displayed. The NGC Registry now provides this solution, becoming the hobby’s most comprehensive coin collecting platform.

Another big announcement is the addition of Autobuild Set, which makes it easier than ever to build the best set, improve a set’s ranking, and compete for NGC Registry awards. It works by automatically filling each slot of a new set or an existing set with the highest-scoring available coin for that slot. For collectors new to the NGC Registry, Autobuild Set is the fastest way to get coins into a set. For those who already use the NGC Registry, it helps make sure a set is receiving as many points as possible. 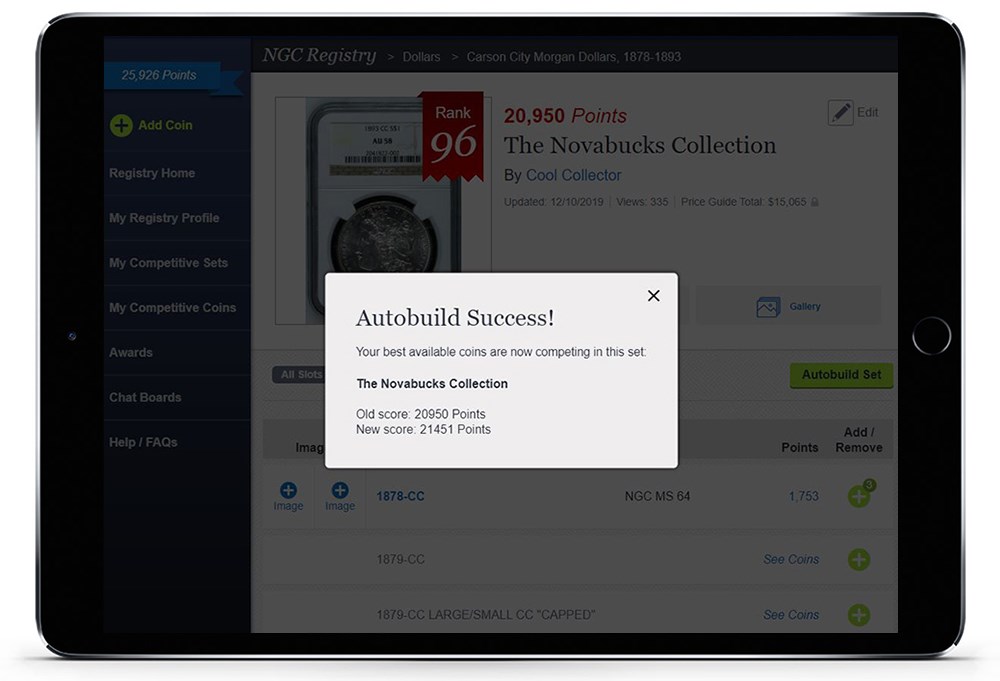 “NGC has invested millions of dollars to make the NGC Registry the best place to organize and display your coin collection,” says Mark Salzberg, NGC chairman and grading finalizer. “These recent updates are only the latest in a series of improvements planned to benefit collectors and the hobby.”

It’s easy to participate in the NGC Registry. To get started, log in online or become a free member, then click on the green + symbol at the top right of the page to add a coin.

Note: The NGC Registry is not endorsed by or associated with PCGS. PCGS is a registered trademark of Collectors Universe, Inc.

PCGS Set Registry is now both fun and games