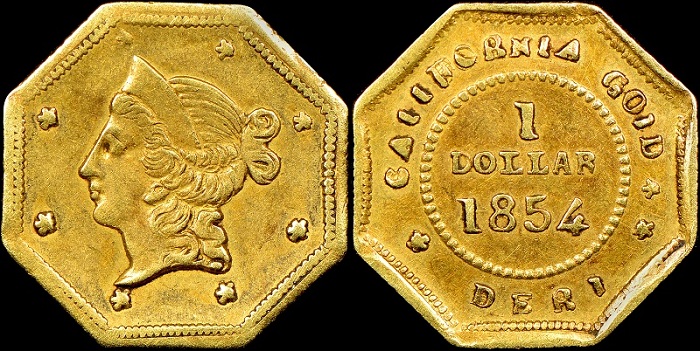 California Fractional Gold Pieces were struck by private mints in California in order to fill a need for smaller denominations in commerce. The coins were issued beginning in 1852 in 25 cent, 50 cent and one dollar denominations. All California Gold Pieces are attributed by NGC at no additional charge according to “BG” numbers, from the last names of Walter Breen (“B”) and Ronald J. Gillio, authors of the reference book for the series, California Pioneer Fractional Gold.

NGC graders attempted to attribute the 1854 Octagonal California Gold Dollar according to the BG catalog numbers but determined that it did not match any of the known varieties listed in the reference book. The coin was clearly struck from the same reverse die as BG-529, identified by the two stars between GOLD and DERI, but the obverse was quite different. There were notable dissimilarities in the placement of both the head and stars.

NGC brought the coin to the World’s Fair of Money show in Anaheim, California, to show it to Gillio, who serves as Executive Director of Consignments / Numismatics Acquisitions Coordinator for Stack’s Bowers Galleries. Gillio, along with John M. Pack, also Executive Director of Consignments for Stack’s Bowers Galleries, and numismatic researcher Robert D. Leonard, Jr., confirmed that this piece was a new variety, which they listed as BG-529a.

New California Fractional Gold varieties are seldom identified with a new discovery made only once every four or five years. This significant find is now graded NGC AU 55 and encapsulated with a label bearing its BG-529a attribution.

NGC, the world’s largest and most respected third-party coin grading service, was founded in 1987. From the beginning, NGC has committed itself to developing an impartial, trusted standard of consistent and accurate grading. To uphold this commitment, NGC’s full-time grading professionals are no longer active in the commercial coin marketplace, and are prohibited from buying or selling coins to ensure impartiality. As NGC has grown to become the leader in third-party grading services, we have maintained a steadfast and uncompromising commitment to this standard. Learn more at NGCcoin.com.