The Reserve Bank of New Zealand has unveiled (August 1) a new coin paying homage to the humble honey bee, or Apis mellifera. The honey bee is an integral part of our lives, providing honey while pollinating flowers and plants that provide the human race with needed sustenance. The life and hierarchy of the honey bee is complicated, with an organized society of three adult castes comprising of the queen, workers, and drones, each with a specific purpose and function.

Queens, who are responsible for producing and laying eggs, live for an average of two-to-three years and sometimes longer. Just one queen can lay thousands of eggs throughout her life.

Worker honey bees comprise the largest number of individuals; between 20,000 to 80,000 workers may live in any hive. They have a life span of only six weeks during the honey production season, when they store nectar, feed larvae, and produce copious amounts of honey.

The life of a drone or a male  honey bee isn’t as fortunate as his counterparts, since they begin life as an unfertilized egg laid by the queen. His primary purpose is simple: to mate with the queen; their life span focuses specifically on this single task. If a mature drone successfully mates with a queen, his life ends soon after the mating flight. If he is unsuccessful, he will be ejected from the hive at the end of the active summer season and eventually die of cold or starvation. 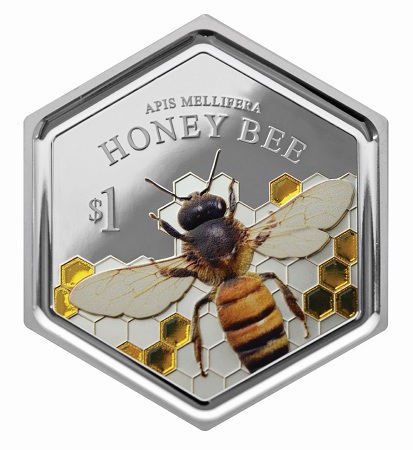 New Zealand has been recognized as one of the most advanced beekeeping countries in the world. Beekeeping was first introduced to Northland in 1839 as a home craft, but it has developed into a progressive and valuable industry. Today, the busy honey bee pollinates roughly one-third of everything we eat, making it essential to agriculture.

In addition to pollinating fruit and vegetable crops, the honey bee produces several varieties of New Zealand honey. From the delicate pöhutukawa through to the stronger flavored kämahi and rewarewa, and the robust jellied mänuka honey, these variations are endless and exclusive to New Zealand.

The natural antibiotic qualities of some mänuka honeys has also led to an international market for health care products. Last year alone, New Zealand exported nearly NZ $300 million worth of local honey. Sadly, honey bees worldwide are under threat as a result of serious pests and diseases, in particular the Varroa mite in New Zealand. This collectible legal tender commemorative coin aims to raise awareness of the crucial role the honey bee plays in food production.

The six-sided coin is produced by the BH Mayer’s Mint GmbH on behalf of the Reserve Bank of New Zealand and is designed by Hannah Stancliffe-White. The reverse design incorporates the hexagonal shape as part of the overall motif based on a cell of honeycomb in a hive. In the honey-making process, worker bees build a honeycomb structure of cells where nectar and pollen are stored, and larvae develop. The honey bee is brought to life on the coin with three-dimensional engraving and color printing. It is depicted sitting on the honeycomb, which has been partially filled with translucent amber-colored resin, replicating real honey. 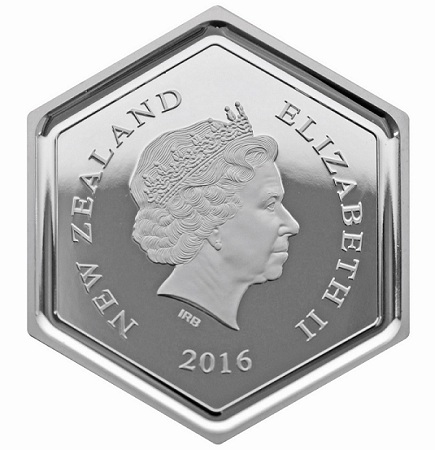 The obverse includes the effigy of Her Majesty Queen Elizabeth II, which is the work of by Ian Rank-Broadley. The year of issue is also shown on the obverse.

The honey bee coin will be available from September, and is housed in a unique hexagonal case. Made from colored acrylic, the translucent case allows you to see the coin within and replicates the translucent nature of pure New Zealand honey.

Each coin comes with an individually numbered certificate of authenticity that tells the story of how honey bees were introduced to New Zealand, written by Roger Bray of The Honeybee Society of New Zealand Inc. For more information on this and other coins issued by the Reserve Bank of New Zealand, please visit the Web site of New Zealand Post, official distributors of RBNZ collector coins and currency.