The Reserve Bank of New Zealand have launched a new commemorative dollar coin to mark the birth of the newest heir to the British throne, that of HRH Prince George, first-born child to the Duke & Duchess of Cambridge who was born on the 22nd July in London. The baby boy is third in direct succession to the British throne, just after his Grandfather Charles, the Prince of Wales and his father, William, Duke of Cambridge. It is the first time since 1901 that there are four generations of Monarchs and heirs alive simultaneously. 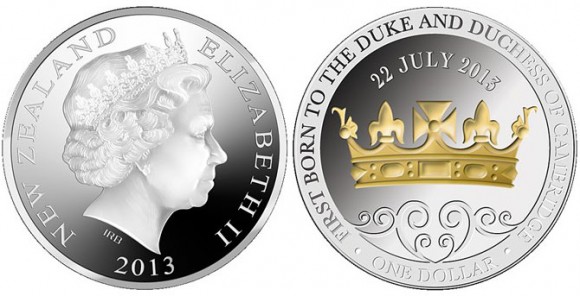 The coin’s reverse design blends both British royal symbols and also includes elements of indigenous New Zealand culture. The intricate and elegant design features the Princely Coronet in gold plating. The Princely Coronet is a type of crown that is assigned to the children of the Heir Apparent (the Prince of Wales), which also includes Prince George’s father, the Duke of Cambridge. The detailed design also features a stylised koru – a pattern used in Māori and New Zealand art to symbolize new life. The coronet is itself selectively gold-plated offering a lovely contrast and the date of birth of HRH Prince George is included in the commemorative text. The obverse of the coin includes the well-known depiction of HM Queen Elizabeth II as designed by Sculptor Ian Rank-Broadley and in use on New Zealand coinage since 1999.

Struck by Mayer’s Mint, Germany on behalf of the Reserve Bank to proof quality, the coin is available direct from Post New Zealand.

For more information on this and other coins issued from the Reserve Bank of New Zealand, please visit the website of New Zealand post, authorized distributors of collector coins at: http://coins.nzpost.co.nz/2013/royal-baby-silver-proof-coin Information offered in English – international orders fulfilled.