The 43rd New York International Numismatic Convention was held this past week on the 18th floor of the Waldorf-Astoria hotel in downtown Manhattan, New York City. Attracting dealers and customers from around the world, the show is a numismatic extravaganza almost solely devoted to world coins and currency. Over 100 dealers were in attendance, with material ranging from obscure 16th century German medals to high-grade Mexican coins from the early 19th century, and pretty much everything in between. Along with the show itself there were numerous auctions held, which we have covered in part elsewhere on this website, and in this article we will take a look back at the show itself, which was the first time your author attended. 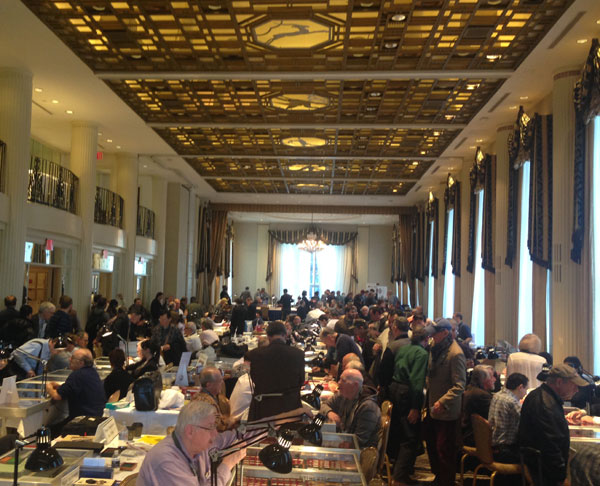 First of all, the New York International show is different from other shows, in that it is not held in a bland convention center somewhere on the outskirts of town, but in a hotel in downtown Manhattan. Of course, for the visitor, there are pros and cons. Those driving in have to hassle with parking, which is an almost impossible task on a weekday in Manhattan, let alone quite expensive. Thankfully, Grand Central Terminal is a short walking distance away, and the show can easily be reached by public transportation. Another positive factor is the options for dining and hotels, with literally hundreds of options in both categories, especially if you were not to stay in the expensive (even by New York standards) Waldorf-Astoria hotel.

Dealer setup was on Thursday, and continued until the early evening, with collector access only possible with the purchase of an early bird or “professional preview” pass, for $125. Access for the public days, held from Friday to Sunday was $20, and given the costs that this show must incur the prices were not unreasonable compared to other coin shows.

So how was the show itself? It depends on who you asked. Most dealers reported mixed sales on Thursday, but sales seemed to pick up for most dealers during the days that the show was open for the public. One major complaint that was held from a lot of dealers was that fresh, new material in all categories was very difficult to find. This was especially the case for choice, high-grade material that is fresh and fully original, the kind of material that is much in demand right now. The auctions echoed this as well, with fresh material having relative good sell-through rates (especially if sold with no or modest reserves), while coins that have been offered around failed to sell, or were selling for relatively low prices.

The public attended in good numbers from Friday through the end of the show on Sunday, and most dealers were quite busy for the most of this time. Several collectors reported finding pieces that they have been on the lookout for; while others reported not finding many coins for their collection, pretty much something that can be expected at any coin show. Because of the relative high-cost of attending, most of the coins that were available were in the higher segment, with raw coins being in the minority. This makes this a show perhaps best suitable for the more advanced collector seeking such pieces.

Overall I think the show was a success for many. The few collectors I spoke to were happy with the organization, as was your author. Even though the setup of the show (there were several rooms that were spread out over the 18th floor, which took some time getting used to) was a little unconventional and some parts of the show felt a bit crammed most of the time it was easy to move around and to find the dealer that you were looking for. The show remains to be the most important solely devoted to ancient and world coins, and the attendance from both dealers and collectors proves this.