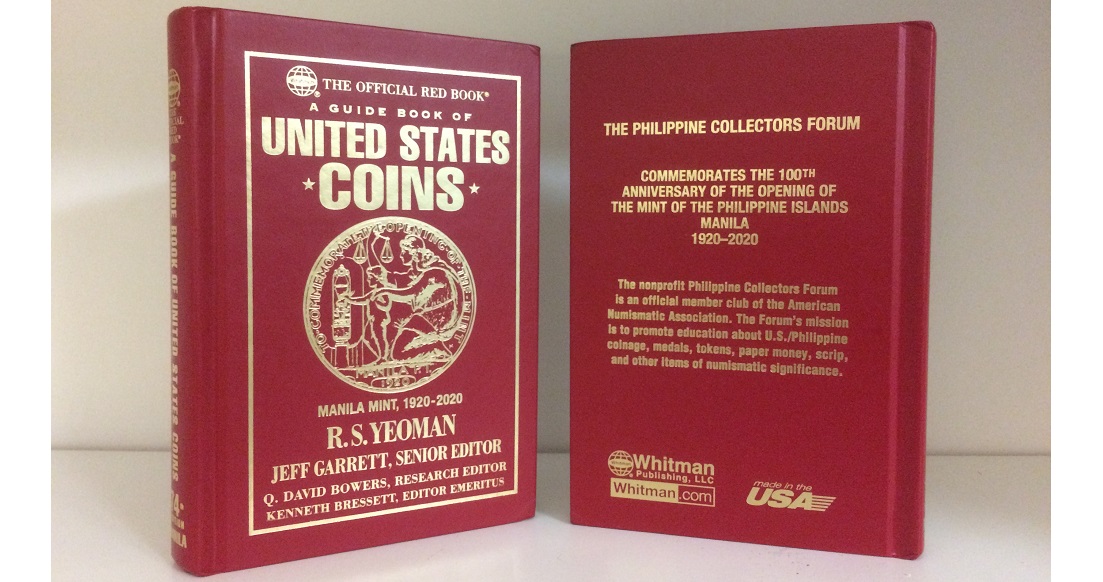 The front cover, back cover, and spine of the 1920–2020 Manila Mint special edition distinguish it from the regular-edition Red Book. 260 copies were printed; 48 were damaged in transit, leaving 212 for sale to collectors. The issue sold out within six weeks. Hover to zoom.

(Pelham, AL) — The 74th edition of the coin-collecting hobby’s annual Guide Book of United States Coins (popularly known as the “Red Book”) debuted in April 2020. A special limited edition of 212 copies was released with a custom goldfoil-stamped cover and a tip-in sheet celebrating the 100th anniversary of the opening of the Manila Mint. The limited print run sold out within six weeks. Sales of the special edition support the educational mission of the Philippine Collectors Forum. 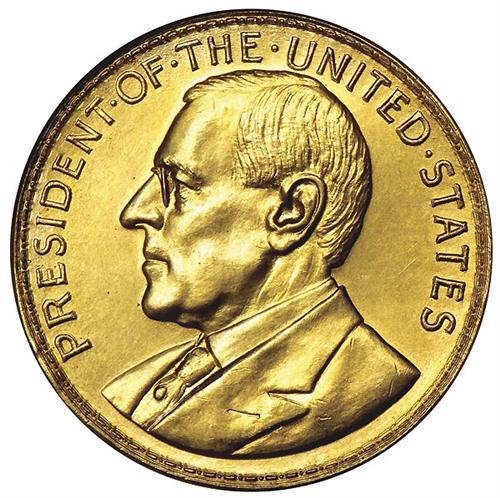 The so-called Wilson dollar of 1920, struck to commemorate the opening of the Manila Mint. Its reverse design is featured on the front cover of the Manila Mint special-edition Red Book. (Photos courtesy of Stack’s Bowers Galleries).

The front cover of the Manila Mint Centennial special edition features the reverse design of the so-called Wilson Dollar (HK-449/450), which was struck at the Mint of the Philippine Islands when it opened in Manila in 1920. 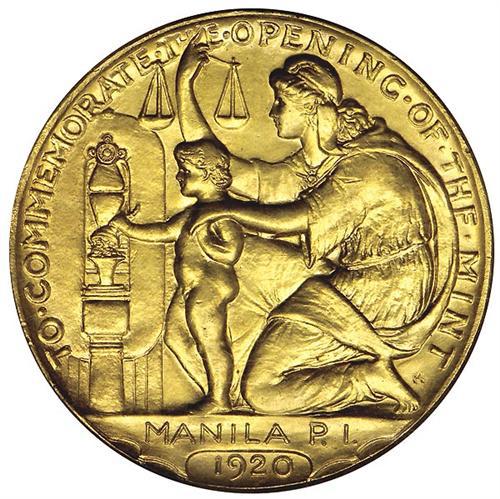 The so-called Wilson dollar of 1920, struck to commemorate the opening of the Manila Mint. Its reverse design is featured on the front cover of the Manila Mint special-edition Red Book. (Photos courtesy of Stack’s Bowers Galleries).

The Philippine Collectors Forum was established in August 2003 at the American Numismatic Association’s World’s Fair of Money in Baltimore, Maryland. The group was founded by Raymond Czahor and Ken Seymore with the active support of ANA President John Wilson. 75 collectors attended the first meeting — the annual convention’s largest club attendance that year except for the Boy Scouts of America. The Philippine Collectors Forum is a nonprofit group and an official member club of the ANA. It holds annual meetings at the World’s Fair of Money. The Forum’s mission is to promote education about U.S./Philippine coinage, medals, tokens, paper money, scrip, and other numismatic items.

The Manila Mint traces its history back to the colonial era of the Philippine Islands. In April 1899, as a condition of the treaty ending the Spanish-American War, Spain transferred control of the Philippines to the United States. One of the government’s early tasks was to sponsor a new territorial coinage. The resulting coins, introduced in 1903, were designed by Filipino silversmith, sculptor, engraver, and art professor Melecio Figueroa. They bear the names of both the Philippines (FILIPINAS, the Spanish name for the islands) and of the United States of America. The silver coins feature a female personification of the Philippines before the volcanic Mount Mayon (northeast of the capital city of Manila). The minor coinage shows a young Filipino man, bare-chested and seated at an anvil with a hammer. 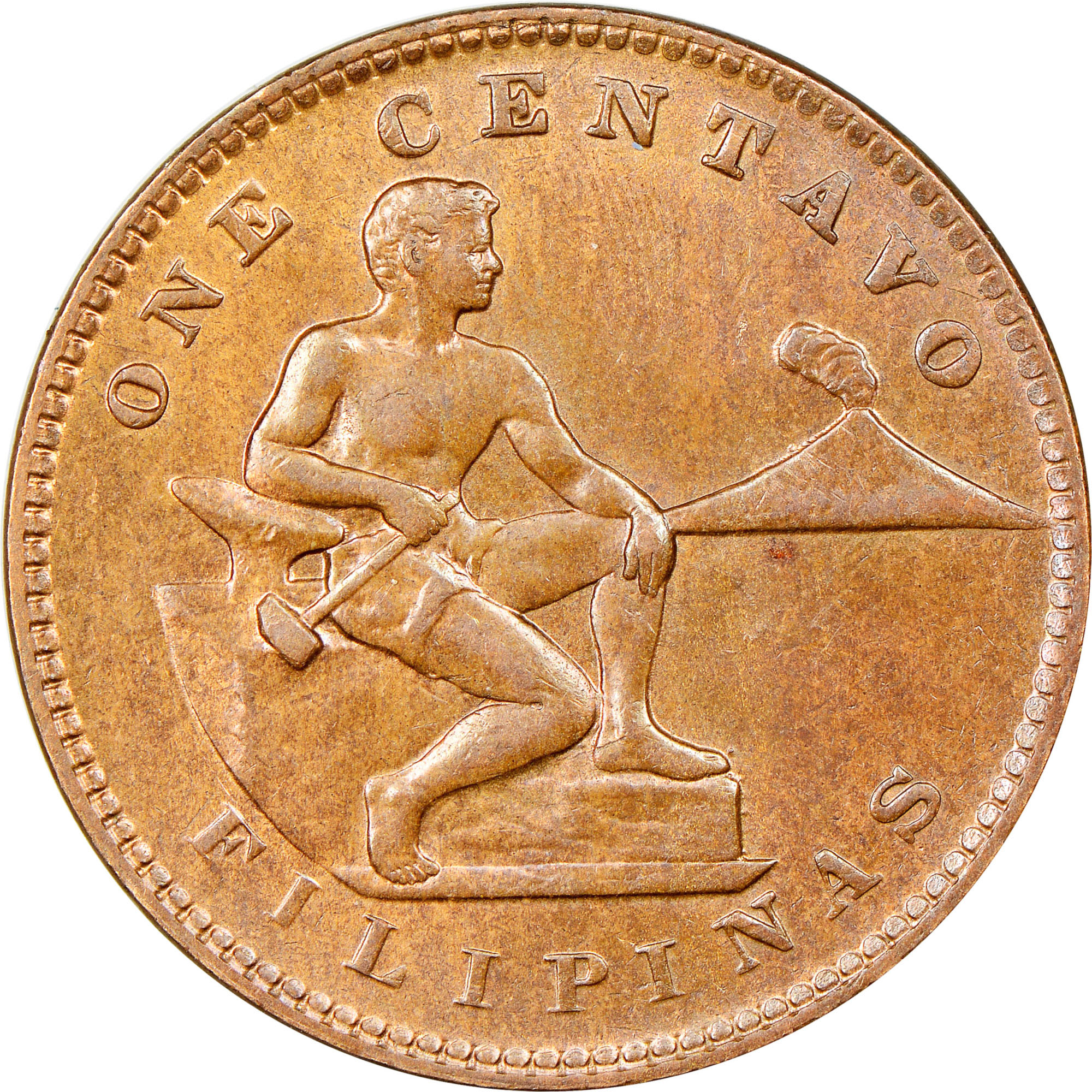 A 1925 centavo minted in Manila; note the legends identifying both the Philippines (“Filipinas”) and the United States of America. (Photos courtesy of NGC).

In the early years, most of the coins were produced at the San Francisco Mint and then shipped to the islands. On February 18, 1918, the Philippine Legislature passed an appropriations bill for the construction of machinery for a new mint in Manila. The Great War was interfering with shipments from the United States. A local mint was seen as being more expedient and economical. In addition, a local mint would support the United States’ goal of moving the Philippines toward its own governance and infrastructure. 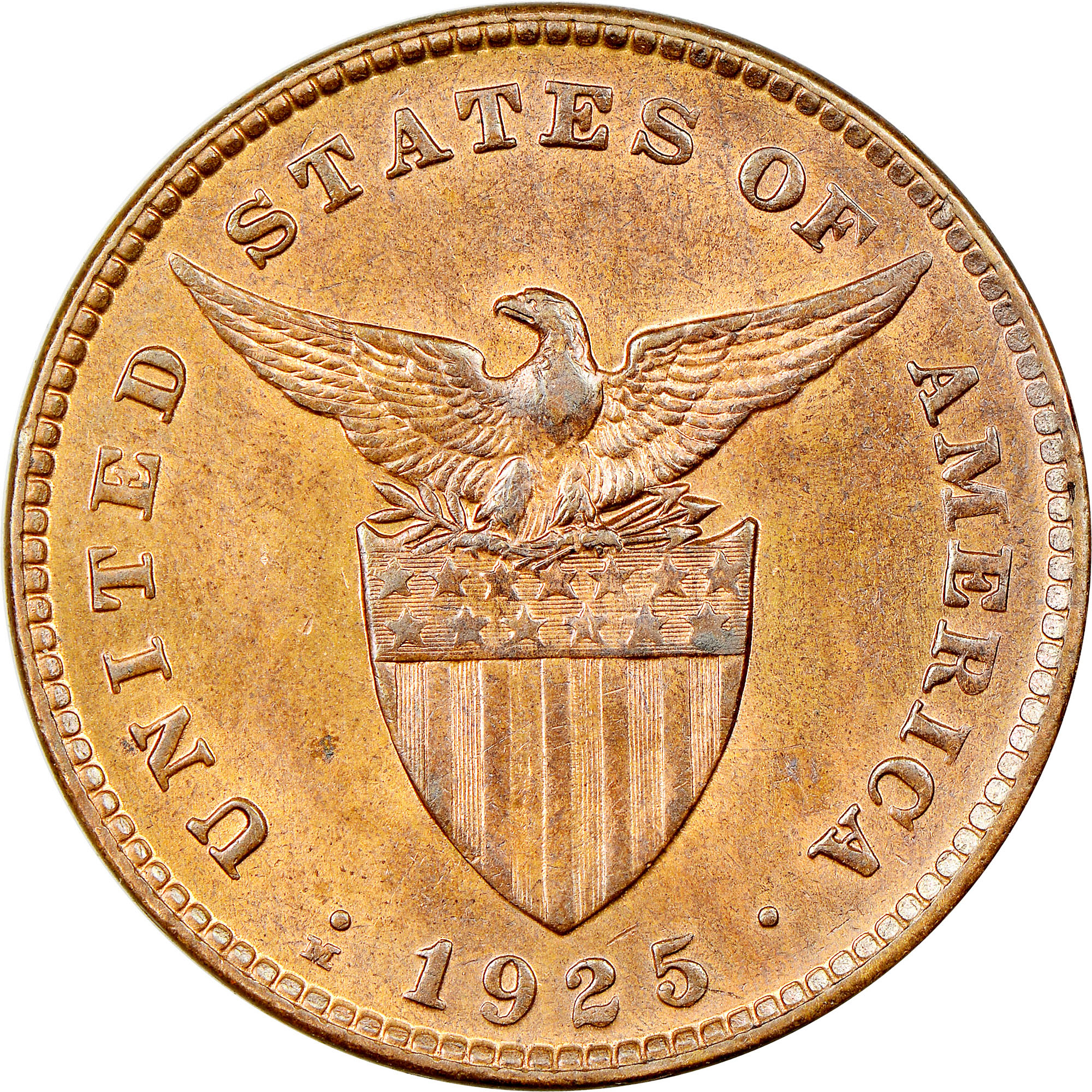 A 1925 centavo minted in Manila; note the legends identifying both the Philippines (“Filipinas”) and the United States of America. (Photos courtesy of NGC).

The mint was built in Manila in the Intendencia Building, which housed the offices and hall of the Senate, and the offices and vaults of the Philippine Treasury. Its machinery was designed and built in Philadelphia under the supervision of U.S. Mint chief mechanical engineer Clifford Hewitt, who also oversaw its installation in Manila. The facility was opened, with formalities and machine demonstrations, on July 15, 1920. The fanfare included the production of an official commemorative medal in gold, silver, and bronze. The first specimen of these medals was struck by Speaker of the House of Representatives Sergio Osmeña (later president of the Commonwealth in the final years of World War II). 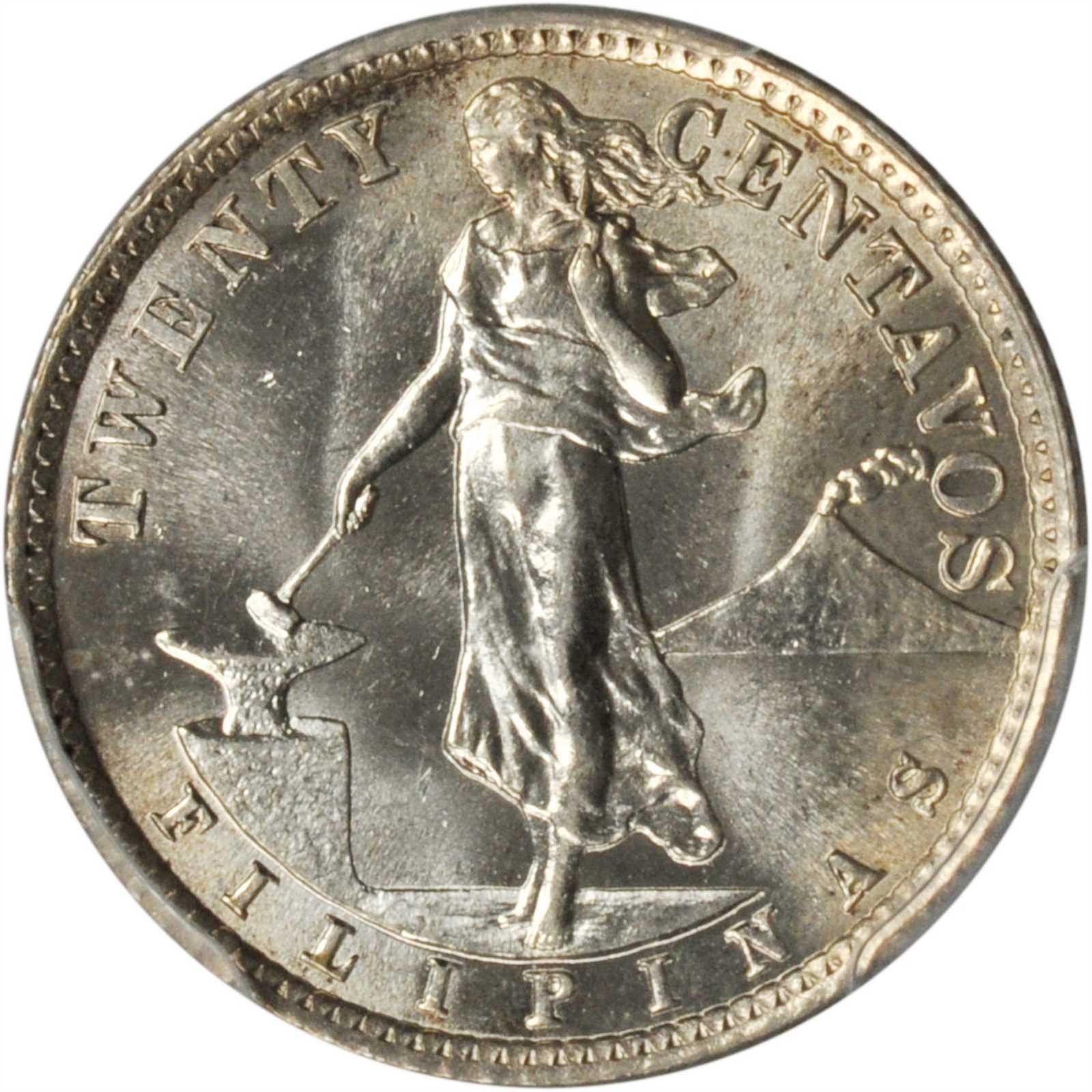 A silver 20-centavos coin struck at the Manila Mint in 1941, before Japanese forces overtook the islands and stopped the mint’s production.

The Manila Mint produced coins for the Philippines from 1920 until Japanese forces invaded the islands in 1941, at which time it ceased operation. (The Philadelphia, Denver, and San Francisco mints would strike coins for the Philippines in 1944 and 1945.) Filipino and Filipino-American military service members, guerrillas, civilians, and leaders were vitally important in the Allied victory in World War II. 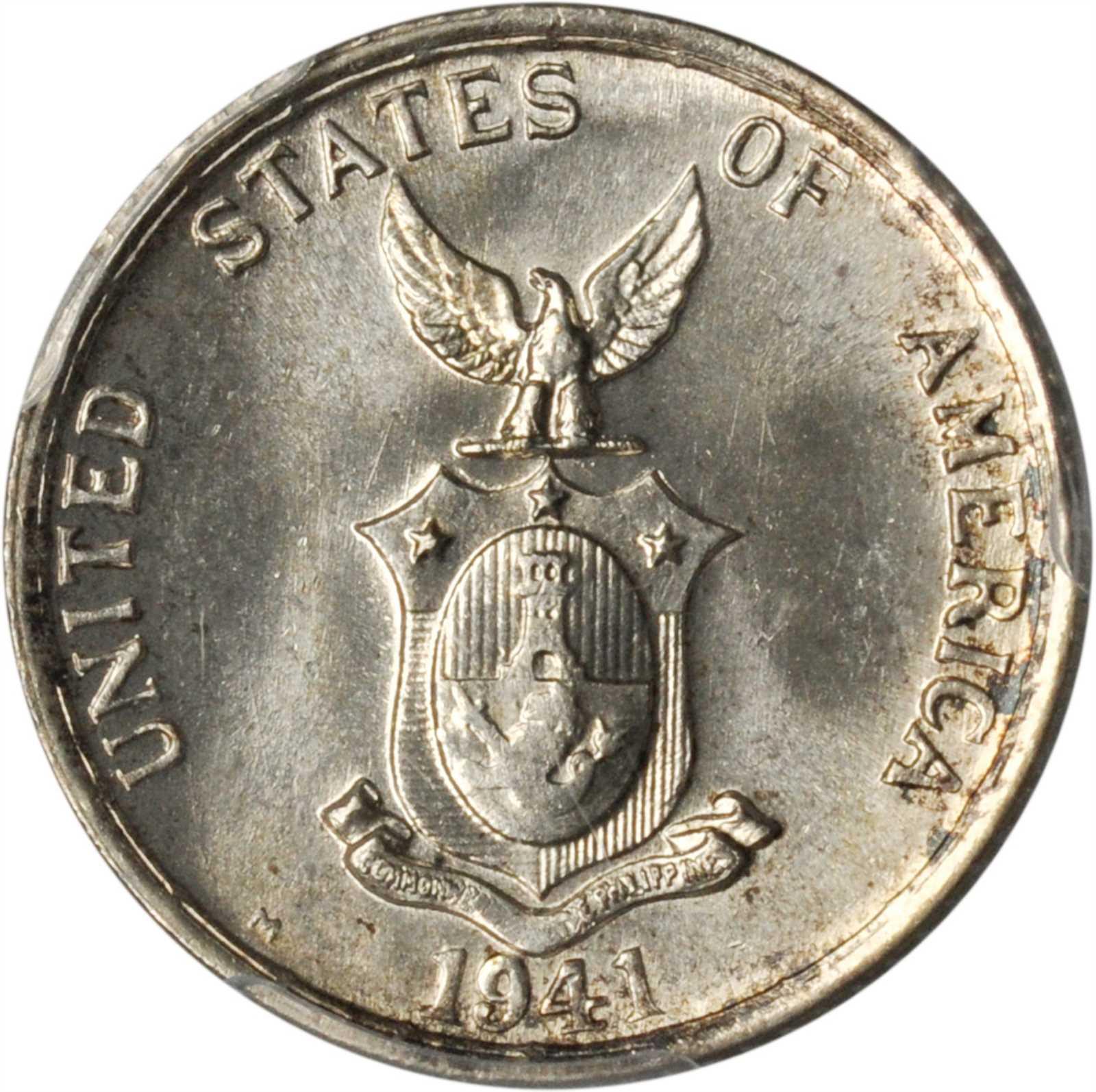 A silver 20-centavos coin struck at the Manila Mint in 1941, before Japanese forces overtook the islands and stopped the mint’s production.

The mint’s buildings were largely destroyed by bombing during the liberation of the Philippines later in the war.

The Commonwealth of the Philippines became an independent republic on July 4, 1946. Today the Philippine coins of 1903 to 1945, including those struck at the mint in Manila, are important mementos of a significant chapter in U.S. history and numismatics. They are a testament to the close ties and special relationship between the United States and the republic and people of the Philippines.

The Philippine Collectors Forum is proud to honor the legacy of the Mint of the Philippine Islands with the 1920–2020 commemorative limited edition of the Guide Book of United States Coins.

The 74th edition of the Red Book is available online and at bookstores and hobby shops nationwide. Whitman Publishing offers a Large Print Edition and several formats of the regular edition (hardcover; spiralbound softcover; and spiralbound hardcover). For more information and to order, visit the website of Whitman Publishing.

Whitman Publishing is the Official Supplier of the American Numismatic Association. As a benefit of membership in the ANA, members can borrow the Red Book (and other Whitman books) for free from the Association’s Dwight N. Manley Numismatic Library, and also receive 10% off all Whitman purchases. Details are on the website of the ANA.