The IPZS (Istituto Poligrafico e Zecca dello Stato) or the Italian State Mint have issued a new silver coin which observes the 70th anniversary of the end of conflict, hostilities and fighting in Europe as the Second World War came to an end on the continent on the 7th May 1945. As 1945 marked the end of World War II, this global conflict still causing  a deep, open wound in the heart of Europe but, for the past seventy years – Europe and the European Union have represented a secure stronghold  of democracy and human rights, and as such was awarded with the Nobel Peace Prize 2012 for its efforts. The Italian Republic, a founding member originally of the European Steel & Coal Board in 1957, the pre-cursor to the European Economic Community and ultimately, the European Union in 1992 have played its part in preserving the peace not on the continent but also around the world and this year much of Europe will celebrate 70 years of peace on the continent, the longest spans of time where no war had been fought on the continent in its modern history.

The coin, designed by Maria Grazia Colaneri is struck to proof quality. The obverse design depicts a female figure half reclining in three-quarter view, with an olive branch in her left hand. The motif is based on detail from the fresco painted by Ambrogio Lorenzetti on the subject of the Good Government for the Sala dei Nove of the Palazzo Pubblico in Siena. On the right, a stylized dove and the stars of the European Union are placed around the coin’s value of “10 EURO”. To the left, the letter “R” identifying the Mint of Rome, and the years “1945 – 2015” the year of the anniversary and that of the coin’s issue respectively. Below the primary design is the arch-shaped inscription “70 ANNI DI PACE IN EUROPA”. 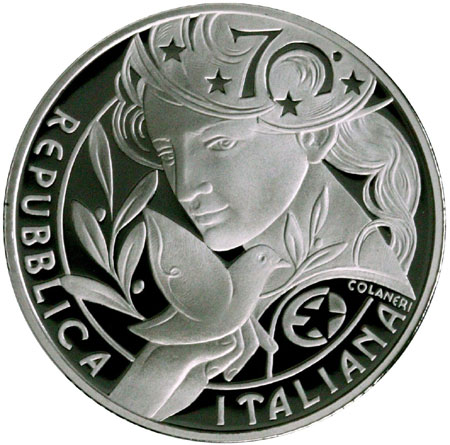 The reverse depicts a dove, the international symbol of peace, and is held by a feminine figure, an allegory of Europe, with the number “70” standing for the anniversary of peace. The stars of the European Union are incorporated in her hair with an olive branch bordering the logo of the EUROPA Star Programme which completes the representation. An arch- shaped inscription “REPUBBLICA ITALIANA” and at the end of the word ITALIANA is the name of the coin’s designer, “COLANERI”.

The coin is issued as part of the annual EUROPA Star numismatic Programme, a voluntary, common initiative of the issuing authorities of EU member countries. Since 2004, many countries have participated in the programme, issuing legal tender coins in precious metals, dedicated to a common subject that celebrates European identity. Last year, for the series European composers, Italy dedicated a coin to Gioacchino Rossini.

The coin is available from the 20th April, for more information on this and other coins issued by the IPZS, please visit their website at: http://www.zecca.ipzs.it/servlet/articoli?indiceTipo=0&indiceArti=357&indicePezzo=0 Information offered in Engliah and Italian, international orders dispatched.