Slabbing fees in 2014 will not rise at PCGS, which announced new reconsideration and restoration services.

“We appreciate your support and all the business you send our way,” President Don Willis announced in a news release. “Shipping fees will increase slightly beginning on January 1, 2014.”

The amount of the increase in shipping was not disclosed.

The big news concerned reconsideration options. Beginning in 2014, PCGS customers will be able to select these Plus (+) upgrades and/or Suffix upgrades:

The company emphasized that reconsideration is just an option, as customers can still submit any PCGS coin through the Regrade service.

I have sent several coins for regrade in the recent past, and none have come back any grade higher. In fact, I was so sure that the coin depicted in this post–the 1885 Morgan MS64 DMPL–would come back MS65, that I sent it back for regrade services, only have it returned once more with the same grade. Perhaps if the upgrade option was Plus, the coin might have earned that designation. Fact is, some coins sent for regrade continue to just fall short if the standard 1 point is all that is allowed. 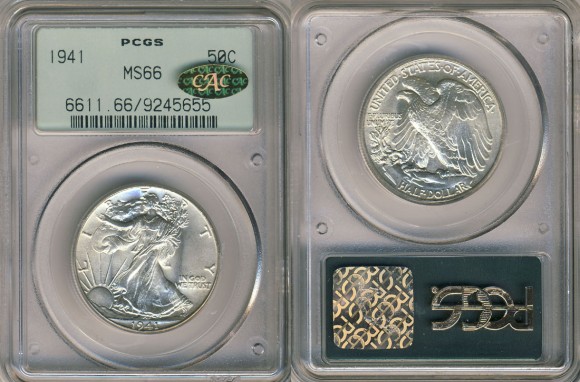 Now coins in those Old Green Holders may enjoy that half-step upgrade. Hobbyists may not appreciate that fact, seeing the new service as just another ploy for resubmissions. But investors may benefit from it as the Plus designation can hike a coin’s value by $1000 or more. Take, for example, an 1884-S AU58 in an OGH. That has a value of $2150. A Plus adds a cool grand to the value.

For those whose grading skills may be lacking, just choose “ANY” and let PCGS figure it all out.

The new service regarding restoration involves the option for a grade, even if the coin cannot be restored. Again, this has investment value on some coins with minor environmental or corrosion damage, especially old Colonial coppers that could command a high “net” value if graded.

Speaking about damage, PCGS felt it necessary to add to the news release a caution about how coins are being submitted to the company. Graders are seeing “poorly manufactured, PVC-contaminated, or even re-used flips.” Willis noted that some of these flips even contain fragments of plastic or metal, adding that the company is not responsible for coins damaged in sub-standard flips.