The Royal Canadian Mint’s Silver Maple Leaf will be getting a new look in 2014. A new finish formed of complex radial lines and a micro-engraved laser mark will become permanent additions to the Mint’s flagship silver bullion coin.

“The Royal Canadian Mint is committed to delivering outstanding quality and value to its customers by constantly improving its products through innovation,” said Ian E. Bennett, President and CEO of the Royal Canadian Mint. “After 25 years of producing the world’s purest and one of its most popular silver bullion coins, the Mint is pleased to offer investors even more value by incorporating technology which also makes our Silver Maple Leaf bullion coin a world leader in security.” 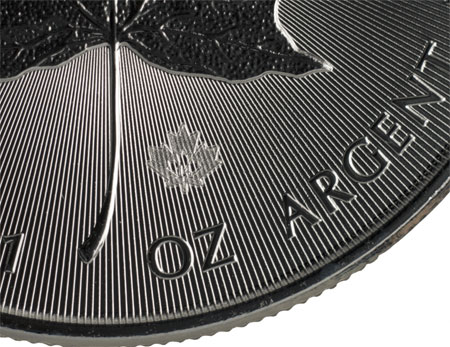 The traditional bullion finish on previous Silver Maple Leaf coins will be replaced with radial lines which emanate from the center of the coin. These lines have been precisely machined within microns on the master tooling to ensure consistent die production and coin striking. The specific width and pitch of the  lines create a light diffracting pattern which is unique the “next generation” Silver Maple Leaf and unmatched by other bullion products.

A micro-engraved security mark has also been added to the reverse of the coin. A textured maple leaf incorporates the numeral “14” to denote the coin’s year of issue and represents the cutting edge in bullion coin security. This technology was also added to the Mint’s Gold Maple Leaf bullion coins starting in 2013, as well as its $1 and $2 circulation coins starting in 2012.

The 2014 Silver Maple Leaf bullion coins containing the new finish and laser mark will begin shipping throughout the Mint’s network of official bullion distributors in December 2013. Soon thereafter, the coins will begin to be available from bullion dealers.