The United States Mint has added some new entries to their scheduled product listing. One of the products surprisingly includes one of the coins from the San Francisco Silver Eagle Set, which recently concluded sales during a limited four week ordering window. A release date for the 2012 Proof Platinum Eagle is indicated, although the final design selection has not yet been announced.

A special set containing one coin and one note will be released to celebrate the United States Mint’s 220th year and the Bureau of Engraving and Printing’s 150th year. 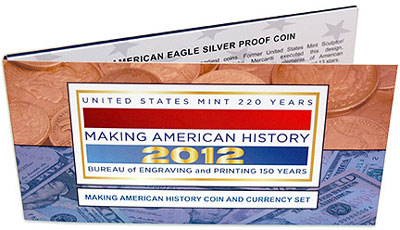 The Making American History Coin and Currency Set is scheduled for release on August 7, 2012. Each set is priced at $72.95 with no product limit or household ordering limits indicated. The sets include one proof American Silver Eagle to honor the artistry and design of our nation’s coins as well as one $5 note to commemorate the 150 years of service of the BEP.

The 2012 Proof Silver Eagle included in the upcoming set will contain the “S” mint mark. This is not indicated on the preliminary product page, but this has been confirmed by a representative from the United States Mint’s Office of Public Affairs. The same coin was also included in the 2012 San Francisco Silver Eagle Set. Some collectors have already began to express their disappointment that this coin has been included in another numismatic product. (See some of the comments here.) During the limited ordering period for the San Francisco Set, there had been no indication that the same coins would be offered within other products.

The US Mint has scheduled the United States Annual Uncirculated Dollar Coin Set for release on September 6, 2012. In the past, this product type has included an uncirculated example of each of the four Presidential Dollars issued for the year, the Sacagawea or Native American Dollar, and the uncirculated American Silver Eagle with “W” mint mark.

The sets were offered in 2007 and 2008, but were canceled for the following two years since the uncirculated version of the Silver Eagle was not minted. Although issuance of the uncirculated Silver Eagle resumed in 2011, the annual uncirculated dollar coin was not offered. As such, it appears that this product type will finally be resumed after a three year gap.

The release of the 2012 American Platinum Eagle Proof Coin has been scheduled for release on August 9, 2012. This coin will represent the third release within a six year design series which highlights the core concepts of American democracy based on the Preamble to the Constitution. The reverse design will represent the concept “For the Common Defence.”

Eleven different design candidates were previously reviewed by the Commission of Fine Arts and the Citizens Coinage Advisory Committee, which offered their recommendations for the alternatives shown above. At the current time, the US Mint has not revealed the final design selection, which is chosen by the Secretary of the Treasury after weighing the various input and recommendations. The obverse of the coin will contain John Mercanti’s recurring design featuring the Statue of Liberty.

Pricing for the 2012 Proof Platinum Eagle will be based on the average market price of platinum during the weekly period leading up to release. Details of the maximum mintage and any potential ordering limits have not yet been announced.

Update: The design selection has just been revealed.