The Perth Mint has started accepting orders for a number of new 2013 Year of the Snake Silver Coins. These coins are released as part of the Australian Lunar Series II, which features the twelve animals of the ancient Chinese lunar calendar. 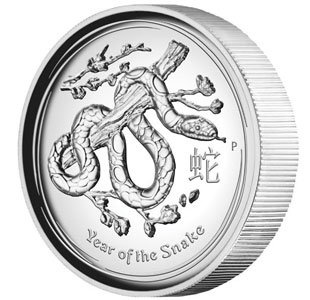 Starting off the array of new collector coins is the 2013 Year of the Snake High Relief Silver Proof Coin. The reverse design of the coin features a representation of a snake curled around a tree branch. The Chinese character for “snake” appears, along with an inscription “Year of the Snake” and the Perth Mint’s “P” mint mark. The obverse features the Ian Rank Broadley effigy of Queen Elizabeth II with the “2013” date and legal tender denomination.

The high relief obverse and reverse designs are produced on concave surfaces, which ensure optimal metal flow is achieved. Struck in one troy ounce of 99.9% pure silver, the coins have a diameter of 32.60 mm and maximum thickness of 6.00 mm. A product limit of 7,500 coins has been indicated. 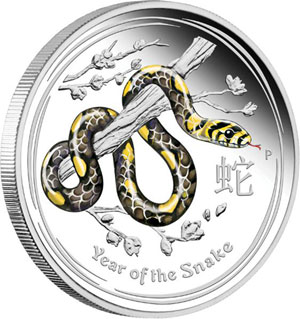 The next collector version is a colored edition of the coin. The similarly situated snake curled around a tree branch is highlighted in black and yellow color.

The one troy ounce 99.9% pure silver coins are struck to proof quality and have a diameter of 45.60 mm and thickness of 2.60 mm. These coins have a limited mintage of 10,000 pieces worldwide. 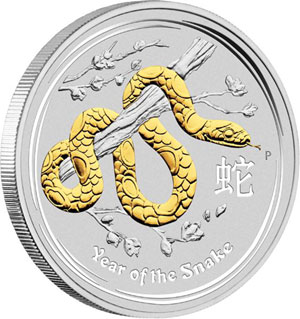 Continuing the array of 2013 Year of the Snake collector coins is a gilded edition. These coins depict the snake gilded in 24 karat gold on a specimen quality coin.

Each coin is struck in one troy ounce of 99.9% pure silver with a diameter of 45.60 mm and thickness of 2.60 mm. The mintage is limited to 50,000 pieces worldwide. The coins may be purchased within an individual presentation case or in capsule with certificate option for those assembling a complete collection within the 12-coin collection case available from the Perth Mint. 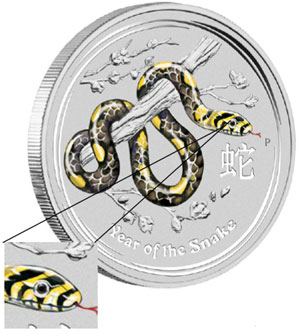 A giant one kilo sized silver coin with a special gemstone design is also available. The coin is struck in one kilo or 32.151 troy ounces of 99.9% pure silver with a black diamond set in one of the snake’s eyes. No more than 5,000 of the coins will be issued worldwide.

Each coin has a diameter of 100.60 mm and thickness of 14.60 mm and comes housed in a display case with illustrated shipper and numbered certificate of authenticity.

A final 2013 Year of the Snake product release is the Typeset Collection, which contains four one ounce silver coins with different finishes. The set is limited to only 1,500 and seems likely to sell out quickly.

The four coins are housed in a display case with illustrated shipper and numbered certificate of authenticity.

For additional information or ordering for any of the above products, please visit the Perth Mint website’s recent releases section.