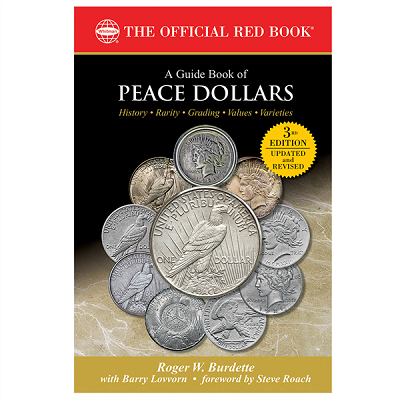 (Atlanta, Georgia)—Whitman Publishing announces the release of the updated and revised third edition of the Guide Book of Peace Dollars, by award-winning numismatic researcher Roger W. Burdette. The 288-page book will be available from booksellers and hobby shops nationwide on September 27, 2016, for $19.95. Before then it is available for preorder (including online at www.Whitman.com).

The Guide Book of Peace Dollars, a volume in Whitman’s popular “Bowers Series” of numismatic references, covers every date and mintmark, plus significant die varieties, of America’s last 90% silver dollar, struck from 1921 to 1935. The coin began as a commemorative of peace after the violent upheavals of World War I. Burdette studies Proofs, patterns, trial pieces, errors and misstrikes, countermarks, and famous collections. Noted Peace dollar collector Barry Lovvorn assisted with the coin-by-coin study and contributed other research.

“The Peace dollar is often unfairly overshadowed by its predecessor, the Morgan dollar,” wrote Coin World editor-at-large Steve Roach in the book’s foreword. “The sensitive Peace dollar offers a different, and perhaps a more accessible, collecting experience. The 1921 Peace dollar, with its high relief, is undoubtedly one of the most attractive 20th-century coins.”

Chapter 4 offers detailed analysis of the mysterious 1964-D Peace dollar, providing for the first time ever a photograph of an obverse die discovered in the Philadelphia Mint. “In order to learn as much as possible about the 1964-D Peace dollar, I extended my research beyond the usual musty archives,” Burdette said. “I interviewed all of the surviving Denver Mint employees who worked there during May 1965, when the back-dated 1964 Peace dollars were struck. Michael Lantz, a 34-year pressman, was particularly helpful in introducing me to former employees and providing background information. He was a die setter and press operator who retired in 1995 as production general foreman. These interviews opened interesting avenues about how the Denver Mint operated and its daily work.”

Burdette explores the origins and history of the Peace dollar (including the American Numismatic Association’s involvement), early designs and casts, and the coin’s production process. For hobbyists he lays out ways to collect and grade the coins, studies the market effect of hoards and meltings, and illustrates unusual examples. In addition to a coin-by-coin analysis that includes market values and rarity ratings, Burdette presents the biographies of key participants in the Peace dollar’s story, a Van Allen–Mallis cross-reference, a bibliography, and an index. To help clarify the Proof issues of 1921 and 1922, he has added a new table of pattern and experimental pieces and has updated information on the 1922 productions.

The first edition of the Guide Book of Peace Dollars debuted at 11 o’clock, November 11, 2008–the 90th anniversary of the official ceasefire that brought peace after the Great War. The second edition was released in June of 2012.

Author Roger W. Burdette is a former member of the Citizens Coinage Advisory Committee, which advises the Secretary of the Treasury on coinage and medals. He is the author of the three-part Renaissance of American Coinage, each volume of which won the Numismatic Literary Guild’s “Book of the Year” award, and From Mine to Mint, which was also a “Book of the Year” winner. He is a contributor to the Guide Book of United States Coins (the “Red Book”), and has shared insight in numerous other Whitman books. As an independent researcher his recent work has delved into World War II experimental and pattern pieces, 19th-century mint operations, U.S. proof coins from 1936 to 1942, and the annually convened U.S. Assay Commission.