The Finance Minister of the United Kingdom, Chancellor George Osborne has unveiled (17th March) the design for the country’s next generation one pound coin ahead of his budget which he plans to announce to Parliament. It was announced last year that the coin, in circulation since 1983 had been compromised over the years with countless counterfeits, with some sources indicating that as many as 35 to 40 million of the coins may be forgeries. 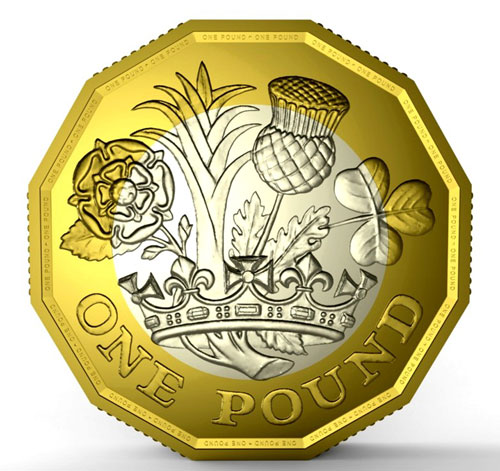 The new coin, designed by 15 year old David Pearce won a nationwide competition organized by the Royal Mint to find a suitable reverse for the newly announced coin which will see it produced as a bi-metallic piece with twelve sides, similar in fashion to the old brass alloyed three pence coin minted in the United Kingdom between 1937 and 1967. The new bi-metallic coin will incorporate micro-text on the face and intermittent reeding on the edge along with the year.

Pearce, a pupil at Queen Mary’s Grammar School in Walsall, whose design was chosen from more than 6,000 entries in a public competition, commented that he had initially learned about the competition from his teacher and thought he had nothing to lose by entering. He further commented that he had researched coin design and what would appropriately represent all parts of the United Kingdom before submitting his winning design. Chancellor Osbourne commented that David Pearce would now leave a “lasting legacy” with the new pound coin. The brief, which was supplied by the Royal Mint and launched on their website, described the criteria for a design for the reverse side. Pearce’s reverse design included representation from each part of the constituent parts of the UK, a Tudor rose for England, a thistle for Scotland, a shamrock for Northern Ireland and a leek for Wales – all gathered together within a diadem.

The coin’s production will begin in 2017 for introduction during the year, the coin will also include the newly unveiled portrait of queen Elizabeth II as designed by Royal Mint engraver Jody Clark. During this time, the one pound coin, introduced in 1983 which replaced the one pound banknote will gradually be removed from circulation. British decimal coinage underwent a significant change in 2008 when the reverse designs, introduced between 1968 and 1971 and designed by Sir Christopher Ironside were replaced with the “Royal Shield” puzzle designs created by graphic artist Matthew Dent.