The Congressional Gold Medal was presented to John Glenn and the Apollo 11 astronauts Neil Armstrong, Buzz Aldrin, and Michael Collins on November 16, 2011 at a ceremony held in the Rotunda of the U.S. Capital. The medal was in recognition of their significant contributions to the nation, authorized under Public Law 111-44.

On February 20, 1962, John Glenn was the first American to orbit the Earth. The Apollo 11 astronauts completed their mission to land the first human on the surface of the Earth’s moon. On July 21, 1969 Neil Armstrong and Buzz Aldrin became the first humans to walk on the lunar surface, while Michael Collins piloted the command module. 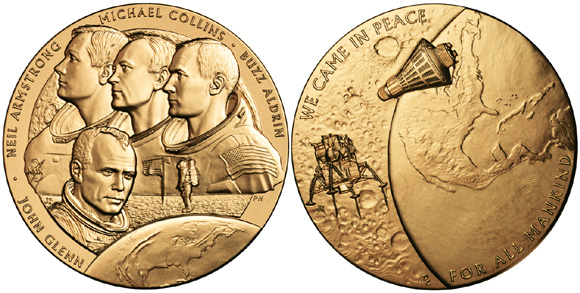 The New Frontier Congressional Gold Medal was designed and produced by the United States Mint. The obverse of the medal features the portraits of the Apollo 11 astronauts in the upper portion in John Glenn in the lower portion. The design also includes a partial view of the Earth from orbit and a horizon line with an astronaut walking on the surface of the moon. The names of each astronaut appear around the outer rim of the medal. The reverse features the Lunar Excursion Module orbiting the moon and the Friendship 7  mission capsule orbiting the Earth. An inscription reads “We Came in Peace for All Mankind.”