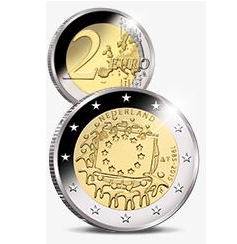 The European Commission has authorized a new €2 coin to celebrate the 30th anniversary of the adoption of the European Union’s emblematic flag.

With its roots having emerged from the initial European Coal and Steel Community (ECSC), this treaty—one of the most important symbols of unity in Europe since the end of World War II—was signed in Paris in 1951, bringing together France, Germany, Italy, and the Benelux countries into a community that aimed to organize the free movement of coal and steel, while providing free access to sources of production. In addition to these important pillars of free trade, a common High Authority supervised the market, encouraging respect for competition rules and price transparency. This treaty is the origin of the institutions known thereafter as the European Economic Community (EEC) and the European Union.

The European flag itself symbolizes the European Union and, more broadly, the identity and unity of Europe. The flag has its origins as far back as 1955, when the Council of Europe—which defends human rights and promotes European culture—chose the present design for its own use. In the years that followed, the council encouraged the emerging European institutions to adopt the same flag.

In 1983, the European Parliament voted in favor of a single flag to represent the European Economic Community and agreed that this flag should be the one used by the Council of Europe. That same year, the flag was adopted by all EU leaders as the official emblem of the European Communities, later to become the European Union.

The now-familiar design features a circle of 12 gold stars on a blue background. They stand for the ideals of unity, solidarity, and harmony among the peoples of Europe. Many believe that the number of stars represents the original 12 member states of the European Union when it came into being in 1992; Contrary to that belief, however, the stars have nothing to do with the number of member countries, though the circle is a symbol of unity.

All member states of the European Union are asked to fly the European Flag along with their national flags in front of state institutions, including parliaments, as well as at official and international events. The European flag is usually prominently displayed above national flags at most embassies abroad, and is often seen during official receptions and government conferences.

To mark the 30th anniversary of the decision by EU leaders to adopt the flag as an EU emblem in 1985, the 19 euro-area countries are issuing a special €2 commemorative coin. Following an online competition held early in 2015 by the European Commission, citizens and residents of the euro area selected the design created by Georgios Stamatopoulos, Senior Engraver at the Bank of Greece. It comprises 12 stars that morph into human figures, embracing the birth of a new Europe.

The latest country to issue this special coin is the Netherlands, which will also include the commemorative coin in its official Proof set for 2015. The coin is available in UNC, BU in a specially designed coin-card, proof, and as a complete set of all 19 issuing countries within the euro-zone. For information and ordering information, please visit the Web site of the Royal Dutch Mint. Information is offered in Dutch only, with orders to European destinations dispatched.

This is the fourth time the euro-area members have decided to collectively issue a commemorative coin. The first was in 2007 to celebrate the 50th anniversary of the Treaty of Rome, signed in 1957. The second time was in 2009, when 16 countries commemorated 10 years of the EMU, and the third time was in 2012 to mark the 10th anniversary of the actual issue of the euro currency in 2002.