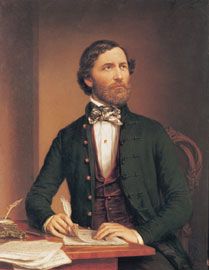 The National Bank of Hungary has issued (22nd April) two new coins which honor one of the country’s most well-known and respected composers, Béni Egressy (1814 – 1851) best remembered for composing the music to “The Szózat“, a famous poem by Hungarian poet Mihály Vörösmarty. The song later became the unofficial “second Hungarian national anthem.

Born as Benjámin Galambos on 21 April 1814 in Sajókazinc (now Kazincbarcika), Egressy was at different times in his career, a composer, actor, playwright and translator. He took the surname “Egressy” from his father Pál Egresi-Galambos, a Reformed Church pastor. He attended the Reformed Church Secondary School in Miskolc and then college in Sárospatak, until his father’s death forced him to end his studies and work as a school master and assistant teacher. He later joined the chorus and decided to become an actor and opera singer, following the example of his brother, Gabor Egressy who was an actor in Kassa. He studied music theory and languages and in 1838 he walked to Milan for voice training as he had no money. Returning from one and a half years in Italy, after modest success as an opera singer, he began work as a composer and from 1843 he was a member of the National Theatre. He translated some sixty plays and operas from German, French and Italian. Of his 47 compositions, 35 appeared in print with most of his works in the “verbunkos” style, along with artificial folk songs, and accompaniment for many poems by Petőfi, Tompa and Vörösmarty.

As a Hungarian musician, his work was pioneering in some ways, as it was mainly German-speaking musicians who had worked with artificial folk songs before him. He combined the verses of the greatest poets of that age with the popular Hungarian verbunkos and csárdás musical styles. He authored several plays himself, with Két Sobri (1851) achieving the most success. In 1843, András Bartay, director of the National Theatre, announced a competition for the musical accompaniment of Vörösmarty’s poem “Szózat” and it was judged that Egressy’s novel submission, which was believed best suited to the spirit of the Reform period. His work was unanimously selected by Vörösmarty himself and by the two greatest musicians of that time in Pest-Buda, Ferenc Erkel and Mihály Mosonyi. Presented in 1843, this work quickly became well-known and even today it stands as a symbolic work and as Hungary’s second national anthem.

Both coins, struck by the Mint of Hungary in Budapest and designed by László Szlávics Jr., depict a front facing portrait of Egressy. The portrait is based on several contemporary portraits of Egressy in both oil and charcoal. The text “EGRESSY BENI” and the years of his birth & death “1814 1851” appear on both sides of the portrait. As part of the EUROPA star series, the Silver Star logo also appears on the obverse, just to the lower right and above Egressy’s left shoulder. The reverse side includes the notes to the first line of the Szózat, “Hazádnak rendületlenül” along with the denomination of 10,000 Forint and the text “MAGYARORSZAG” and the year of issue “2014” and the mintmark “BP” just under the year.

The coin is issued as part of the EUROPA international collector series with this year’s common topic featuring “European composers” in 2014. With this issue, the National Bank is also continuing its newly introduced policy of issuing the precious metal commemorative coin’s design in a base metal and issued for its face value – though in very limited quantity.

For more information on these and other coins issued by the National Bank of Hungary, please visit the website of the Mint of Hungary at: http://coins.hu/ Information offered in Hungarian and English, international orders dispatched.