The Royal Canadian Mint have launched three new coins which celebrate and pays tribute to one of this North American country’s most treasured symbols of nationhood, that of the Canadian Flag. For many, no other symbol is as synonymous with Canada as its distinctive red-and-white flag.

As the National Flag of Canada celebrates its 50th anniversary, the nation and its people pay tribute to a beloved national symbol by proudly observing the anniversary of its official adoption. Prior to the adoption of the now iconic “Maple leaf” banner, Canada had utilized a flag with a red field along with a representation of Britain’s “Union Jack” positioned to the upper left corner and Canada’s coat of arms or, crest placed to the right of the union jack and centered. This design was adopted in 1868, shortly after Canadian Confederation and continued use, albeit with minor changes to the coat of arms, until the adoption of the recognizable maple leaf flag the world has come to associate with Canada. The adoption of a distinct, national flag was proposed as far back as the late nineteenth century, but to no avail—that is, until the idea was raised again in 1964 by the then-Prime Minister Lester B. Pearson. After much divisive debate, the design, which was created by George Stanley and inspired by the flag of the Royal Military College of Canada (RMC) in Kingston, Ontario, was finally and officially approved by a majority of Parliament on the 15th December 1964. Elizabeth II, Queen of Canada, proclaimed the new flag on the 28th January 1965 and it was inaugurated on the 15th February the same year at an official ceremony held on Parliament Hill in the presence of Governor General, the Prime Minister, other members of the Cabinet, and Canadian parliamentarians. At the stroke of noon, the Red Ensign was lowered for the last time and the new maple leaf flag was raised. The crowd sang the national anthem “O Canada” followed by “God Save the Queen.” 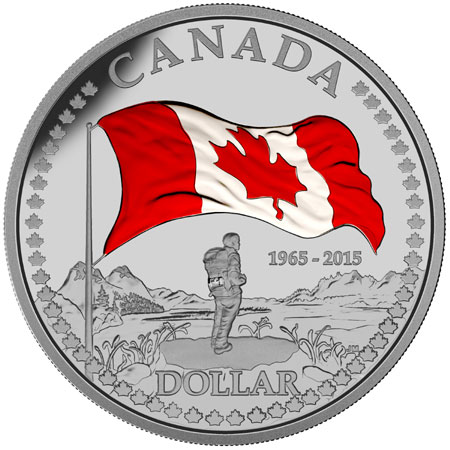 One Dollar: This year’s silver dollar coin is designed by John Mantha. Occupying much of the image’s field, the famous red flag, its white center square bears the stylized red maple leaf, billowing softly in the wind at full-mast atop a flagpole. Beneath it, a backpacker stands turned to the right and gazes at the horizon beyond a landscape that is a cross-section of Canada. The addition of a small Canadian flag on the backpack is visible at closer inspection and a very special tribute to Canadian travelers, it also speaks to the respect and recognition this national symbol receives throughout the world. The primary design is highlighted with a symbolic ring of 50 maple leaves around the edge. 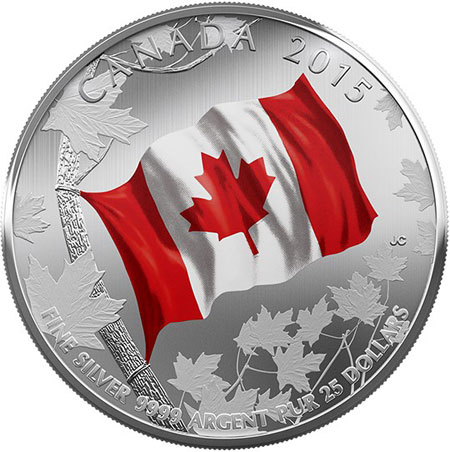 25 Dollars: The “25 for 25” coin’s design is created by artist Julius Csotonyi depicts a larger than life colorized image of the Canadian flag, affixed to a maple leaf branch and surrounded by the very leaves which inspired the flag’s design. This is Canada’s first colorized face value silver coin.

The one dollar coins and 25 dollar coins both include an effigy of HM Queen Elizabeth II designed by Susanna Blunt and in use on all circulation and many commemorative coins since 2000.

For additional information on these and other new coins available from the Royal Canadian Mint, please visit the new releases section of their website. Information offered in English and French, international orders dispatched.