The Treasury of Alderney has launched three new coins which celebrate the centenary of the birth of writer and poet Dylan Thomas (1914 – 1953). Popular both in his homeland of Wales and internationally, Dylan Thomas’ works have been performed and enjoyed for decades, and include the ‘play for voices’ Under Milk Wood, the haunting poem Do not go gentle into that good night and the popular tale A Child’s Christmas in Wales.

Meaning ‘son of the waves’, Dylan’s name originates from the Welsh mythical ‘Mabinogion’ tales, and there could be no more fitting a name for the tempestuous character. Thomas was born in Swansea, Wales, in 1914, and although an undistinguished pupil, he left school at 16, becoming a journalist for a short time. While many of his works appeared in print while he was still a teenager, it was the publication of “Light breaks where no sun shines”, in 1934, that caught the attention of the literary world. Although Thomas was appreciated as a popular poet in his lifetime, he found earning a living as a writer difficult, which resulted in his augmenting his income with reading tours and broadcasts. His radio recordings for the BBC during the latter half of the 1940s brought him to the public’s attention and he was used by the Corporation as a populist voice of the literary scene. Thomas traveled to America, where his readings brought him a level of fame. His time in America cemented Thomas’ legend, where he recorded to vinyl A Child’s Christmas in Wales. During his fourth trip to New York in 1953, Thomas became gravely ill and fell into a coma from which he did not recover. He died on the 9th November 1953 and his body was returned to Wales where he was buried at the village churchyard in Laugharne. 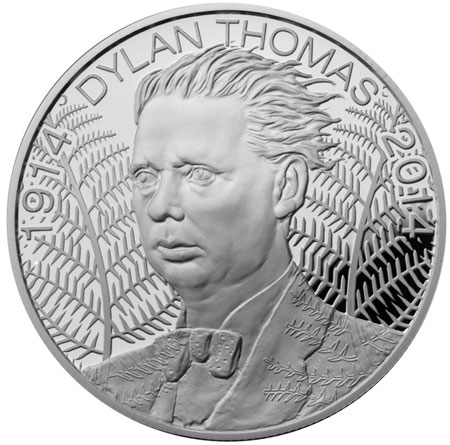 The coin is struck by the Royal Mint on behalf of the Treasury of Alderney and is designed by senior Royal Mint engraver Lee R. Jones who has captured his true persona with the instantly recognizable three quarter facing portrait of Dylan complete with his wild hair and wide eyes. Other touches, such as the ferns that recall the well-known poem Fern Hill which are delicately detailed on both sides of the portrait. His name “DYLAN THOMAS” is boldly positioned just above the portrait with the years of his birth and death on each side along the upper rim. The obverse side includes an effigy of HM Queen Elizabeth II as created by Ian Rank-Broadley and in use on British, British Isles and some commonwealth nations coinage since 1998. 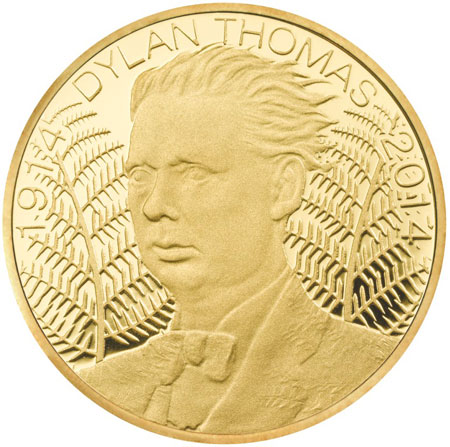 These commemorative coins have been created in collaboration with Hannah Ellis, Dylan’s granddaughter. An information booklet provided with each coin reveals delightful insights into Dylan’s life and works.

For more information on this and other coins issued by the Treasury of Alderney, please visit this section of the Royal Mint website. Information offered in English, international orders dispatched.