The Mint of Finland have unveiled a new coin which remembers the first modern Finnish currency, the Markkaa, and pays tribute to Finnish coin collectors. Finland’s first publication especially dedicated to numismatics was published in 1745. The coin and medal collection of the Academy in Turku was begun in 1747 and the first known private collections in Finland are believed to have started in the 18th century.

On 29 March 1809, Finland was brought under Imperial Russian control and gained the status of an autonomous Grand Duchy within the Russian Empire until the end of 1917. With the collapse of Imperial Russia and since the head of state was the Czar of Russia, it was not clear who the chief executive of Finland was after the Russian revolution. The government declared independence on the 6th December 1917. Under some influence from Imperial Germany, supporters of Finnish independence, the Finnish parliament elected Prince Frederick Charles of Hesse, a brother-in-law of German Emperor Wilhelm II as the King of Finland and Karelia on the 9th October 1918. On the 9th November 1918, Wilhelm II had abdicated as Emperor due to the Central powers defeat of the Great War of 1914 – 1918 and Germany was itself declared a republic. Two days later, on the 11th November 1918, the Finnish government asked Prince Frederick to give up the crown and a Republican form of government was officially adopted on the 17th July 1919.

The markka currency was introduced in 1860 by the Bank of Finland, which replaced the Russian ruble at the rate of four markka to one ruble. The first Finnish mark coins, divided by 100 pennia – and with their obverse depicting the Imperial two-headed Russian eagle along with the coat of arms of Finland on the shield at its center, were struck in silver at Mint of Finland on the 15th October 1864. In 1865 the markka was wholly separated from the Russian ruble and tied to the value of silver. After total Finnish independence in 1917 the currency was backed up by gold. After 142 years of continual use, the markkaa currency was retired from use on the 1st January 2002 when Finland adopted the EURO single currency. 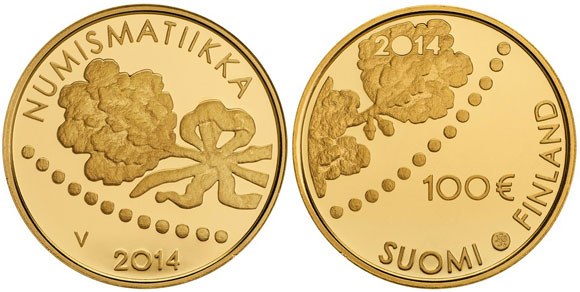 The coin, designed by artist Hannu Veijalainen, depicts on the obverse elements of the first design of the markkaa coin. The oak leaves and decorative ribbon encircling the face value of the silver marks originally seen on the reverse are replicated on the new First Mark and Numismatics collector coin. The text “NUMISMATIIKKA” can be seen along the upper rim. A similar and co-ordinated design is depicted on the reverse along with the text “SUOMI FINLAND” as well as the coin’s denomination of €100 and year of issue, 2014.

Finland’s only gold coin scheduled for 2014 will be available in both a specially numbered version and the ordinary issue. The numbered version is presented in a Vitriini glass case specially designed by Iittala. Those collectors interested in the numbered special edition coin, (100 pieces in total) is only available by booking & reserving at the Mint of Finland’s customer service, please  telephone +358 (09) 8943 4343, weekdays 09.00–15.00 (3:PM) from the 11th April. The numbered gold coins will be booked on a first-come-first-served basis beginning on the release date.

For further information on this and other coins available from the Mint of Finland, please visit their website at: http://www.suomenrahapaja.fi/eng/ Information available in Finnish, Swedish and English – international orders dispatched.