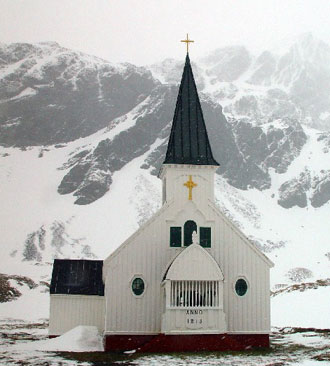 The Treasury of South Georgia & The South Sandwich Islands have issued a new crown which observes the centennial of one of the Island group’s most well-known and recognized landmarks. The Grytviken Church, The Norwegian Lutheran Church located in the town of the same name, last year marked the 100th anniversary of its consecration which took place on Christmas Day, 1913.

The church was built at the initiative of Carl Anton Larsen (1860 – 1924) the Norwegian Antarctic Explorer, founder and first manager of Grytviken’s whaling station. The wooden church was designed by Larsen’s son-in-law, and pre-fabricated in Strømmen, Norway. It would have room for a congregation of 200 and had a room for reading and writing. The church was ready for consecration at Christmas and the two bells that had been cast in Tønsberg, Norway, were rung at midnight on Christmas Eve. Kristen Løken officiated at the consecration of the church on Christmas Day. At the same time, he baptized the daughter of the station manager.

After Løken returned to Norway in 1914, there was sporadic attendance by pastors for short periods until 1931. For much of the time the church was rarely used for services. It was more often used for film shows and concerts, until a cinema was built in 1930 next to the church. It was also used as a carpenter’s workshop and as a potato store.  Funerals were an exception. The church had to be cleared out for the funeral of Sir Ernest Shackleton who died at Grytviken in 1922 and is buried in the Church’s nearby cemetery. During the whaling years there were four weddings and it is now used for weddings of passengers from cruise ships.

In 1995 collapse of the building seemed imminent. The Commissioner for South Georgia, directed that it should be made sound and waterproof. Over the next few years there was a complete restoration that included strengthening the main frame, replacing the roof. The cross on the steeple was removed by a helicopter of the Royal Navy for repainting. 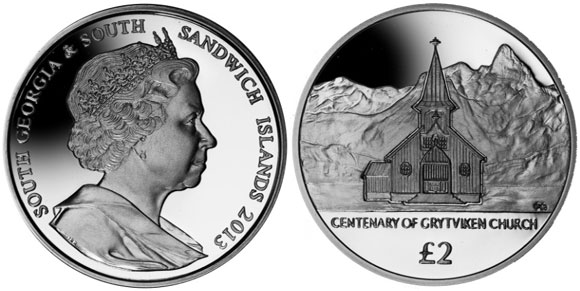 The coin, struck by the Pobjoy on behalf of the Treasury of South Georgia & South Sandwich Islands, features on the reverse a depiction of the simple church amongst the snowy grounds of South Georgia. The text “CENTENARY OF GRYTVIKEN CHURCH” is seen just under the primary motif with the denomination “£2” just under the text.

The obverse of the coin carries an effigy of Her Majesty Queen Elizabeth II designed by Ian Rank-Broadley FRBS along with the year of production “2013” and the issuer, “SOUTH GEORGIA & SOUTH SANDWICH ISLANDS” around the Queen’s effigy.

The church is now one of the attractions when visiting Grytviken. It is the only building that has retained its original function. It is decorated for Christmas when passengers from cruise ships and crews of naval vessels hold carol services. The coin is available in both BU (cupro-nickel) and proof quality struck in sterling silver.

For more information on this and other coins issued by South Georgia & South Sandwich Islands, please visit the website of the Pobjoy Mint at: http://www.pobjoy.com/ukworld/section.php/945/1/aeecd358933a7393f1acb7ccef1d5a0c Information offered in English – international orders dispatched. 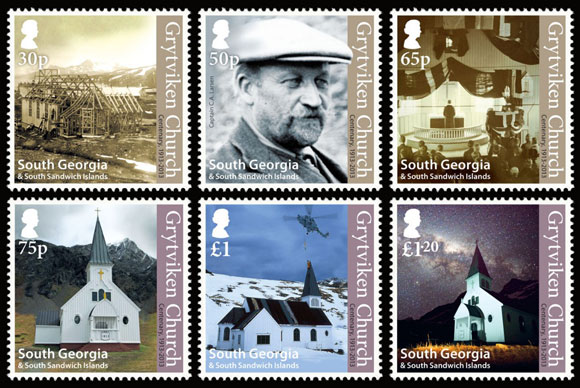 As part of the British territory’s celebration of this distinctive and important landmark, the Government of South Georgia & South Sandwich Islands have also issued a set of colourful commemorative stamps to mark Grytviken Church’s centennial which portray the structure as it is today and during its construction. For information about acquiring these stamps, please e-mail