The Bank of the Lao People’s Democratic Republic have announced a new commemorative coin which celebrates the 60th anniversary of the establishment of diplomatic relations between the Laotian government of the day and Japan.

A former French protectorate in Southeast Asia and previously known as French-Indochina along with Vietnam and Cambodia since 1893, the kingdom of Laos proclaimed its independence from France in 1949 which was officially recognized in 1953, subsequently the French Indochina federation ended in 1954. Laos became an independent kingdom with its ruler King Sisavang Vong (1884 – 1959) presiding over the government of Laos until his death in 1959. Sisavang Vong was succeeded by his son Sisavang Vatthana (1907 – 1978?) who ruled until 1975 when he was prompted to abdicate by Pathet Lao forces. He and many members his family were interred in a “re-education” camp and it is not clear when he died though it is believed to be 1978 or as late as 1984. The new Pathet Lao government renamed the country the Lao People’s Democratic Republic on the 2nd December 1975.

Diplomatic relations were established with Japan, one of the first countries to recognize the Laotian kingdom on the 5th March 1955 at which time Laos opened an embassy in Tokyo in October 1956, Japan opened their embassy in Vientiane, the Laotian capital in September 1955. Today, Laos has established relations with 134 countries and the European Union. To mark this anniversary, H. E. Mr. Thongsing Thammavong, Prime Minister of the Lao People’s Democratic Republic, recently paid an Official Working Visit to Japan from the 4th to the 7th March. 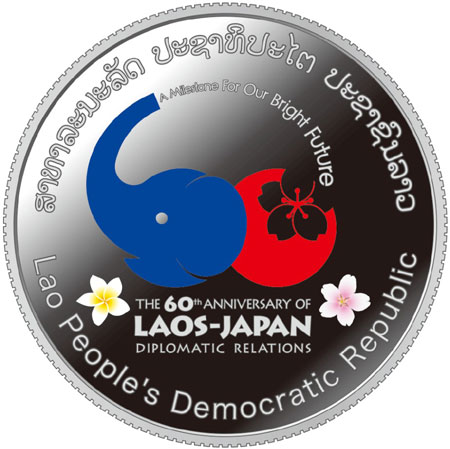 The coin, produced by the Mint of Japan on behalf of the Bank of the Lao People’s Democratic Republic is struck to proof quality and includes colorized elements. The obverse includes stylized representations of both countries, that of the head of an elephant and a cherry blossom, both symbols of each nation as well as the commemorative text “A milestone for our bright future”. Flower depictions of each country those of a cherry blossom on the right and plumeria, the Laotian national flower are seen on the left of the lower commemorative inscription. 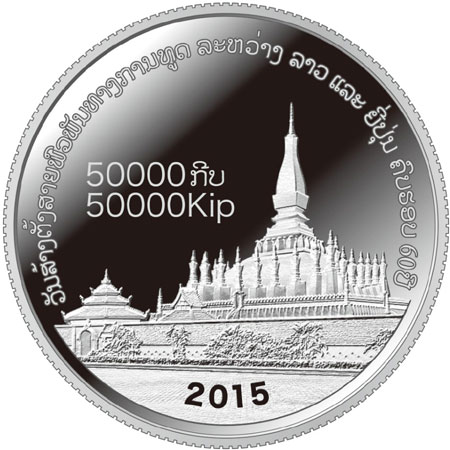 The reverse depicts the Pha That Luang, a symbolic national temple in Vientiane along with the coin’s denomination and year of issue.

The Mint of Japan are accepting on-line orders from the 4th March until the 3rd April. For more information on this and other products offered by the Mint of Japan, please visit their website at: http://www.mint.go.jp/eng/buy-eng/international-eng/eng_coin_international_commemorative_index.html Or e-mail at: Information offered in English and Japanese, some items are offered for international dispatch.