The People’s Bank of China has launched (31st August) a set of commemorative coins which focus on ancient Chinese bronze artifacts and ornaments in an effort to further the promotion of Chinese bronze culture and to highlight the essence of Chinese bronze art. It is believed that this is the first in a series of several sets to feature bronze and other metallic art and objects.

Bronze, an alloy of copper smelted with tin or lead, results in a shiny brownish metallic color. The earliest tin-alloy bronzes date to the late 4th millennium BC in ancient Persia and some ancient sites in China and Mesopotamia, present-day Iraq. The bronze artifacts featured on the new set of coins, five in total (two gold and three silver) are Chinese bronzes of the Shang and Zhou dynasties. Development of bronze culture in China is divided into three stages, namely the formation of the period (4800-4000 years ago), the heyday (including the Xia, Shang, Zhou 600 years), and the transition period (the late Warring States to Qin and Han Dynasty).

The Chinese bronzes exquisitely represent superior technology and culture of the Qin Dynasty, rated as the highest example of artistic value around the world. The items featured range from actual working utensils to ornamental pots and vases. All coins are struck to proof quality and each coin shares the same reverse design, that of the Chinese People’s insignia consisting of the temple of heaven and five stars arranged above and within a wreath. The text in Chinese characters reads “PEOPLE’S REPUBLIC OF CHINA” and the year of mintage “2012” is positioned below the insignia. Produced at the Shenzhen Guobao Mint Limited facility, the Shenyang Mint Company Limited and Shanghai Mint Foundry Company Limited – the set is distributed by the China Gold Coin Incorporation distribution.

For more information on these and other coins issued by the People’s Bank of China, please visit the website of the China Gold Coin Incorporation (CGCI) at: http://www.chngc.net/EnVersion/Index.aspx

2000 Yuan gold: Bronze casting from the early Shang Dynasty. The artifact reaches a height of 100 cm, the specifications along the border are 62.5 cm / 60.8 cm wide. Excavated in Zhengzhou – on Zhang Zhainan Street in 1974, this item is now in the possession of the Museum of Chinese History. The artifact is one of the largest ever found intact from the early Shang Dynasty bronzes previously discovered. This box-shaped item, thought to be used as cookware, is built with four legs and two looped handles on the wider sides. Decorated on each panel with patterned circular relief, it is thought this intricately crafted item evolved into an item or symbol of status. 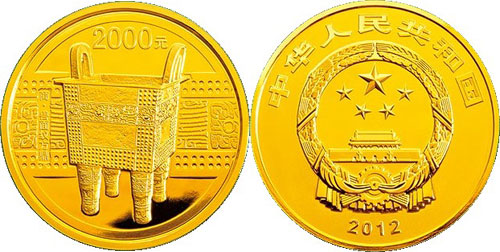 100 Yuan gold: Bronze container used for drinking, it was crafted in the late Xia Dynasty. The artifact measures 22.5 cm high, with a streaming tail length of 31.5 cm. Unearthed as recently as 1975, it is now in the possession of the Town of the Yanshi Museum. The Xia Dynasty is believed to be the originator of bronze culture in China, and the casting & artistic standards were in its infancy. However this extraordinarily shaped vessel, one of the largest items found representing the era, shows an ability to achieve symmetry, convex lineage and ornate decoration not previously seen on earlier examples from this era. The artifact at the same time reflects an austere style or characteristics attributed to further Xia Dynasty bronzes.

300 Yuan silver: Cast during the middle of the Shang Dynasty. The artifact stands 31.1 cm high and 18.4 cm in diameter. This item is now on display at the Shanghai Museum. Its elegant decoration and level of technology skills, it is believed that this vessel was used for wine during ceremonial events. The neck of this extraordinary bronze container is decorated with two hooded handles and includes three legs and corners. A portion of the lower half is decorated with what appear to resemble eyes and much of the surface is etched with linear shapes and patterns.

50 Yuan silver: Ornamental Bowl casting during the middle Shang Dynasty. The artifact measures 19.2 cm high, 14.6 cm diameter, has typical design characteristics. This bowl is now in the possession of the Shanghai Museum. Possessing rough ornamentation, but a skillful level of technology, this particular item was most likely used as cookware due to the tripod shape. Its neck is decorated with two handles on both sides and double-lines of shapes and linear  shapes distinctive of the period and region.

10 Yuan silver: “Xianwen vessel” created in the early Shang Dynasty. The artifact is 21.2 cm tall and 14.7 cm wide and was designed to hold water or wine most likely during ceremonies. It is now in the possession of the Palace Museum in Beijing. This artifact reflects the characteristics of the early Shang Dynasty bronze period – modeling a simple, plain and lovely form. Its neck is decorated with three rings and it’s particular distinctive design is its three petal-shaped legs.