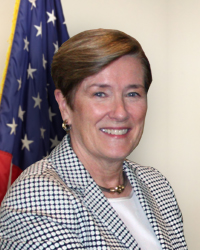 The United States Mint has announced that Mary N. Lannin of San Rafael, California has been appointed as Chairperson of the Citizens Coinage Advisory Committee (CCAC) effective immediately.

Ms. Lannin, who replaces outgoing Chairperson Gary Marks, was appointed as a CCAC member in 2014 based on the recommendation of the House Minority Leader. Marks will remain a member of the CCAC until his term expires later this year.

A freelance editor with developed skills in numismatic publication, Ms. Lannin has worked with authors from the United States, Canada, Germany, and Greece.

Ms. Lannin holds a Bachelor of Arts degree from the University of Minnesota (1969) and attended Trinity College, Washington D.C.

The CCAC was established in 2003 by Public Law 108-15 to advise the Secretary of the Treasury on theme and design proposals relating to circulating coinage, bullion coinage, Congressional Gold Medals, and national and other medals produced by the United States Mint. The CCAC also makes recommendations to the Secretary on the events, persons, or places commemorated on, as well as the mintage levels and proposed designs for, commemorative coins. The CCAC submits a report annually to Congress and the Secretary describing its activities and providing its recommendations.