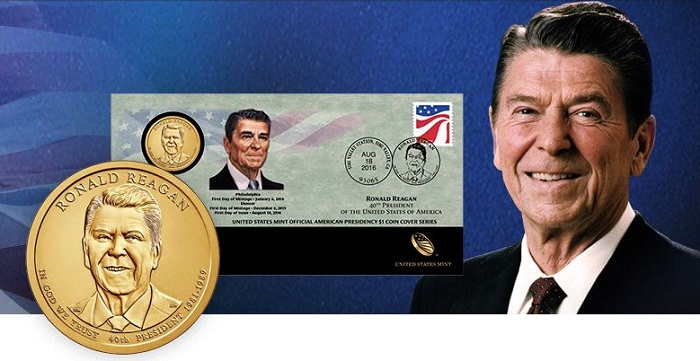 The U.S. Mint is now taking orders for the 2016 Ronald Reagan One Dollar Coin Cover, which is available for $19.95 and has been assigned a product limit of 25,000 units. Sometimes referred to as “first day” coin covers, items in this series contain two Presidential dollars respectively manufactured on the first day of the coins’ production at the Philadelphia and Denver Mint facilities.

The coins are contained in a display card that showcases their obverses and reverses. The outer cover bears a portrait of President Ford, the dates of the coins’ production, the issue date of the coin cover, and a Red, White, and Blue(Forever) stamp. 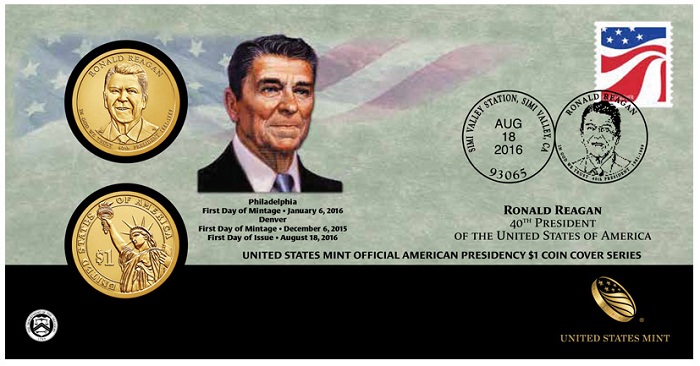 The reverse bears a design common to all Presidential $1 coins; it was designed and engraved by Don Everhart and includes a depiction of the Statue of Liberty beside the coin’s $1 denomination, with UNITED STATES OF AMERICA curving along the rim. 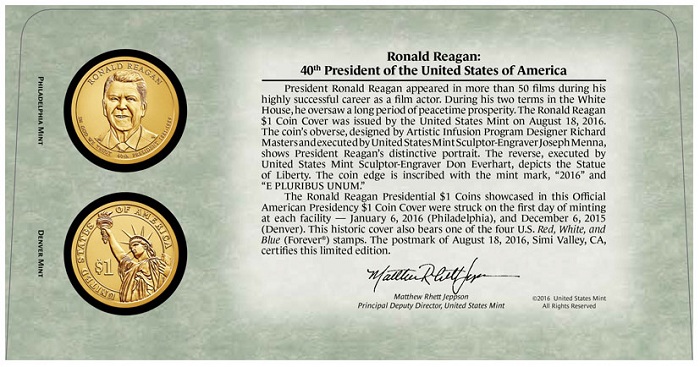 The Reagan coin cover is the 39th release in this product series, which launched in 2007. As living ex-presidents are not honored as part of the U.S. Mint’s Presidential dollar series, the Reagan $1 coin marks the conclusion of program.

As noted on Mint News Blog, this item’s 25,000-unit product limit is 5,000 pieces higher than the number allotted for the 2016 Nixon and Ford issues. It is also 10,000 more than were applied to last year’s releases featuring Harry S. Truman, Dwight D. Eisenhower, and Lyndon B. Johnson, though the 2015 Kennedy cover, which is still on sale, was given a 35,000-unit maximum. As of this writing, sales of 2016’s previous two Presidential Coin Covers have reached 12,893 for the Nixon issue and 11,090 for the Ford release.