The U.S. Mint has opened sales of the 2016 National Park Service 100th Anniversary Commemorative Coins, giving collectors the chance to choose between Proof and Uncirculated versions of a $5 gold coin, a silver dollar, and a clad half dollar, as well as a three-coin set containing Proof versions of all three.

Prices are included on the chart below. The costs of the gold coins may be adjusted in accordance with the the changing market value of gold, per the Mint’s pricing chart for products containing precious metals. The introductory prices will expire on April 25 at 3 pm ET.

The clad half dollar obverse features a hiker exploring the wilderness and a child peeking through ferns at a small frog. Inscriptions are LIBERTY, 2016, IN GOD WE TRUST, 1916, and NATIONAL PARK SERVICE. The obverse was designed by Barbara Fox and sculpted by Michael Gaudioso.

The coin’s reverse features the N.P.S. logo, with UNITED STATES OF AMERICA, E PLURIBUS UNUM, HALF DOLLAR, STEWARDSHIP, and RECREATION inscribed around the design. The reverse was designed by Thomas Hipschen and sculpted by Charles L. Vickers.

The silver dollar’s obverse design, created and sculpted by Joseph Menna, features a depiction of Yellowstone National Park’s Old Faithful geyser behind a solitary bison. The inscriptions LIBERTY, NATIONAL PARK SERVICE CENTENNIAL, IN GOD WE TRUST, and 1916-2016 are placed around the image.

The reverse image includes the N.P.S. logo before a Folklórico dancer. Inscriptions are UNITED STATES OF AMERICA, E PLURIBUS UNUM, $1, HERITAGE, CULTURE, and PRIDE. The reverse was designed by Chris Costello and sculpted by Jim Licaretz.

The obverse of the $5 gold coin features profile portraits of John Muir and Theodore Roosevelt, with Yosemite National Park’s Half Dome pictured in the background. Inscribed along the rim of the coin are LIBERTY, 2016, and IN GOD WE TRUST.

Its reverse features the N.P.S. logo and the inscriptions UNITED STATES OF AMERICA, E PLURIBUS UNUM, and the coin’s $5 denomination. Don Everhart designed and sculpted both the obverse and reverse of the coin. 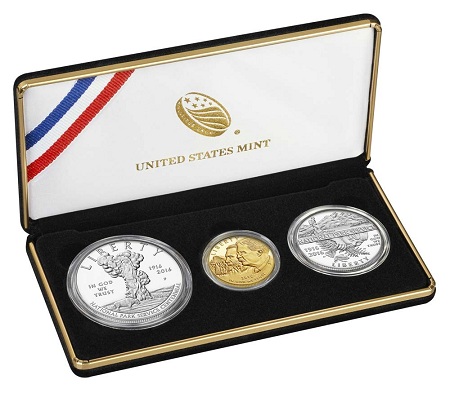 The three-piece set containing Proof versions of each coin has a product limit of 15,000 units and an order limit of two per household. It is currently priced at $466.45.

The law authorizing these issues allows for the production of up to 100,000 $5 gold coins, 500,000 silver dollars, and 750,000 clad half dollars. Surcharges of $35 for each gold coin, $10 for each silver coin, and $5 for each clad coin have been included in the pricing. This year, funds generated by those surcharges will go to the National Park Foundation for the preservation, protection, and promotion of resources under the care of the Park Service.