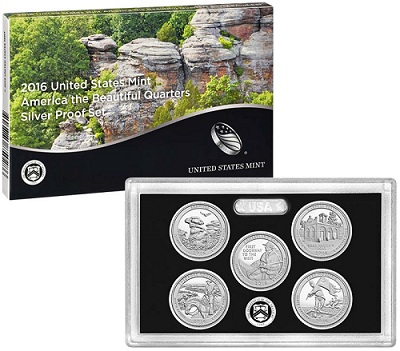 The U.S. Mint has continued its busy March release schedule by releasing two new products this week. The first of these items, the 2016 America the Beautiful Quarters Silver Proof Set, was released yesterday, March 7, and contains 90% silver versions of each of this year’s five ATB issues. The set is available for $31.95 and has no listed restrictions on sales or orders per household.

Each of the included quarters features a Proof finish and the San Francisco Mint’s “S” mint mark. The coins in this set are enclosed in a clear plastic display case that protects the pieces while allowing for easy perusal of both the obverse and reverse designs. 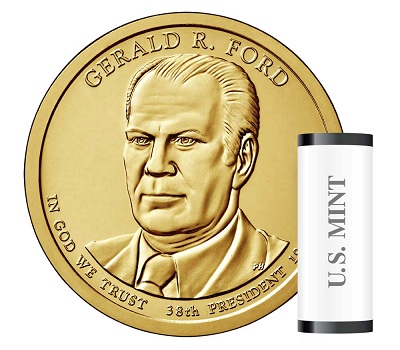 The Gerald Ford Presidential dollar features an image of the President on its obverse, with GERALD R. FORD inscribed along the top of the design and IN GOD WE TRUST, 38th PRESIDENT, and 1974-1977 displayed at the bottom. The reverse bears a design common to all Presidential $1 coins; it includes a depiction of the Statue of Liberty beside the coin’s $1 denomination, with UNITED STATES OF AMERICA curving along the rim. Phebe Hemphill designed and engraved the obverse of the coin, while Don Everhart designed and engraved the reverse.

Living Presidents are ineligible for this series, so the Presidential $1 coin program will conclude after the release of the Reagan issue later this year.