The long-awaited launch of the proposed new £50 banknote issued from the Bank of England is to make its debut on the 2nd November, the Bank of England press office has announced. The note, which will be the first to include the signature of the Bank of England’s Chief Cashier Chris Salmon, in office from April 2011, and is the second banknote to be issued in the present “F” series. 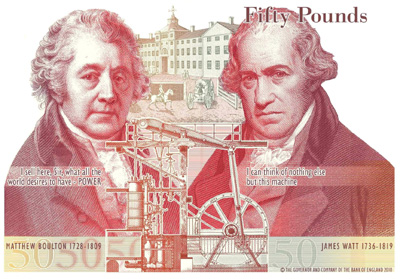 The notes reverse will include the portraits of two prominent industrialists / inventors of the 18th century, Matthew Boulton (1728 – 1809) and James Watt (1736 – 1819). It is the first time that two persons will be portrayed together on one side, the year of copyright is also visible on the reverse. Matthew Boulton and James Watt were responsible for accelerating the progress of manufacturing steam engines during the 18th and 19th century. Their inventions and improvements to this technology helped make a huge contribution to the progress of the Industrial Revolution.

The new banknote retains the same dimensions (156 / 86 mm) and a similar colour scheme as the presently circulating note and it is expected that both note types will circulate simultaneously until a date for the “D” series or “Houblon” note is announced recalling the 1994 dated issue.  Regardless of their legal tender status, all Bank of England notes are always redeemable at their offices for new notes.

On the obverse, the portrait of HM Queen Elizabeth II, in use since 1990, remains. Also prominent will be new and improved security features (yet to be announced). The reverse sees both portraits of Boulton and Watt, which are based on engravings from images held by the Bank of England. In addition there are two other illustrations included on the designs. The Whitbread Steam Engine, from the Timmins Collection (Reproduced with the permission of Birmingham Libraries & Archives) The second image is of Matthew Boulton’s Soho Manufactory from the Phillp Album. (Reproduced with the permission of Birmingham Museums and Art Gallery)