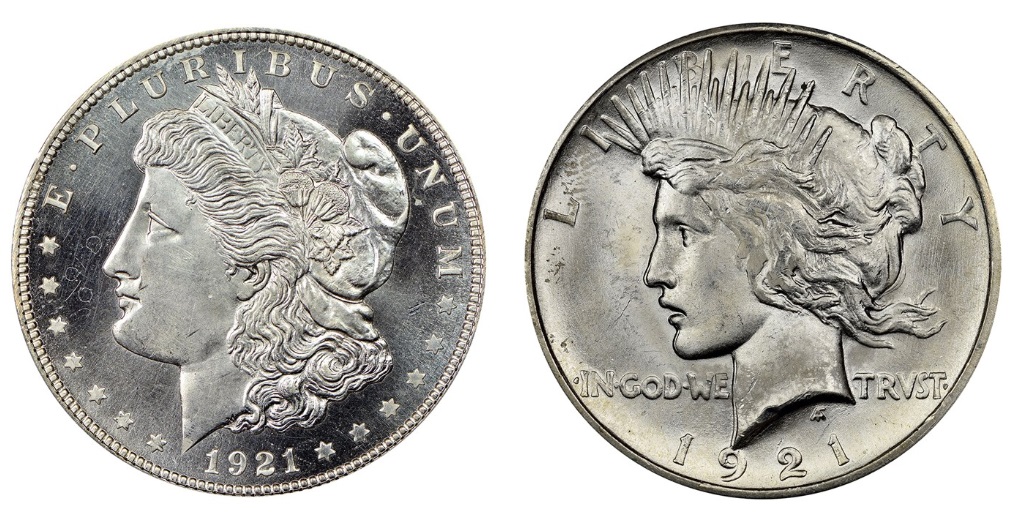 The Morgan dollar, left, was replaced by the Peace dollar, right, in 1921. Hover to zoom.

If Congress authorizes them, new coins would celebrate 100 years since the passing of the torch between two popular silver dollar series.

An effort to empower the U.S. Mint to issue coins celebrating the Morgan and Peace dollars, two of America’s most-loved series, has been re-introduced in Congress. The bill (H.R. 6192), which is called the 1921 Silver Dollar Coin Anniversary Act, would be an exciting development for U.S. numismatics and deserves the widespread support of the coin collecting community.

Previous legislation to issue these as commemorative coins in 2021 stalled. Now, a new effort is underway that champions this important cause. If it becomes law, it would require that the Mint issue 2021 coins with the designs of the extremely popular Morgan and Peace dollars.

Coin collectors are encouraged to write to or email their U.S. Representative and Senators to explain why these coins would be a worthy addition to U.S. numismatics. Below is a template that could be used for such a letter:

I am a coin collector who lives in your district. I write to you today to support H.R. 6192, the 1921 Silver Dollar Coin Anniversary Act.

This legislation would be a boon to the coin collecting hobby because it celebrates two silver coins that are among the most beloved in U.S. history. The Morgan dollar ended its historic run in the year 1921, when the Peace dollar celebrating the end of World War I took its place.

The Morgan and Peace dollars played an important role in commerce in their time. Today, the market for them among collectors is strong. Numismatic experts anticipate robust demand if the U.S. Mint were to sell 2021-dated coins to celebrate the 100th anniversary of the passing of the torch in these iconic silver series.

This legislation would help energize the modern coin marketplace, which is supported by countless collectors. Importantly, it is designed to be revenue-neutral to the federal government.

Please support the passage of H.R. 6192 and encourage your colleagues to do likewise.