The Royal Dutch Mint have issued (29th April) an official medal which marks the first anniversary of the abdication of the country’s last monarch Queen Beatrix and the accession of its current head of state King Willem-Alexander on the 30th April 2013. On the day of the new King’s investiture, the Dutch kingdom had welcomed its first King in more than 123 years – the Netherlands had not seen a male sovereign since the reign of King Willem III when his only child, Princess Wilhelmina succeeded him in 1890.

The obverse of the special medal features King Willem-Alexander’s Investiture speech on the April 30, 2013. The reverse design includes the abdication speech by former Queen Beatrix which was delivered to the nation just two days before her 75th birthday, the 28th January of the same year. 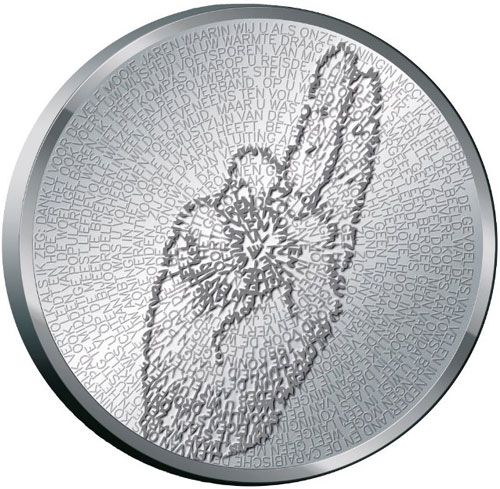 The medal, with its innovative design, includes two relevant images. The obverse includes the King’s right hand raised while he holds his two fingers in the sign of pledge & oath – the text of his oath forming the overall design in a continuous circle of words – line by line. 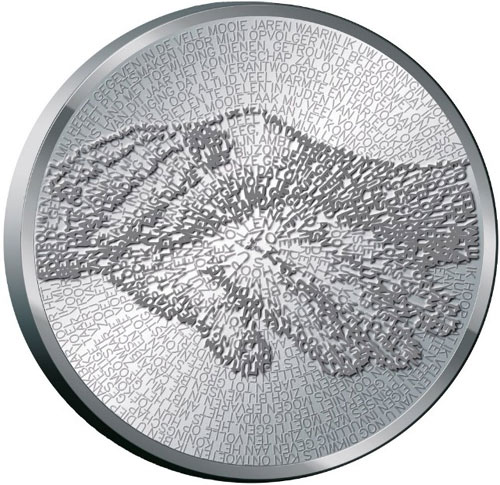 The reverse, depicts the former Queen’s hand on that of her Son’s – also with a portion of her speech in a continuous circle of text forming the overall image.

The medal is available in two versions, as a silver crown-sized example housed in custom presentation box and as a smaller cupro-nickel version housed in a coin-card in similar form to the recent commemorative 5 & 10 euro coins.

For more information on this and other items offered by the Royal Dutch Mint, please visit their website at: http://www.knm.nl/ Information offered in Dutch – orders dispatched to European destinations only.