The Royal Dutch Mint have launched celebratory coins issued on the occasion of the 50th birthday of HM King Willem-Alexander, which will occur on the 27th April of this year. The coins, which are issued in both gold and silver, share the same commemorative designs and are also the first coins ever issued in celebration of the birthday of a Dutch head of state.

Four coins will be released: two issued in gold, one in sterling silver, and one in silver-plated copper. They are designed by the team of Persijn Broersen and Margit Lukács, who were also the designers behind the King’s Investiture coin (issued in 2013). There is a familiar look to the obverse portrait, which is a three-quarter profile of the king looking towards the right (similar to the portrait used in 2013). The design is inspired by King Willem-Alexander’s motto: Encourage, represent, connect. These words, together with the practise of water management, have ancient roots in Dutch culture. A symbolic stream of elaborately intertwined ribbons surrounds the portrait along with the inscription WILLEM-ALEXANDER KONING DER NEDERLANDEN 50 jaar.

The reverse side also takes up the theme of streams, using a similar ribbon design with more intricate paths. The reverse also includes the denomination, year of issue, and mintmarks, along with the king’s motto, in Dutch (VERTEGENWOORSIGEN SAMENBINDEN AANMOEDIGEN) placed around the primary design.

Apart from the larger diameter for the silver €10 issue, another special addition to the range will be the Silver Birthday Coin Colour Set 2017. This option—limited to 750 sets—contains three coloured silver coins, one with colour on the obverse and two with colour on the reverse. The gold coins are encapsulated and presented in a custom wooden case with certificate of authenticity. The €10 silver-plated coin is encased in a blister-type coin-card.

The three-coin set (above) contains one un-colorised and two colorised silver coins (below).

Please visit the website of the Royal Dutch Mint for more information on these and other coins on offer.

A King for the Netherlands: Willem-Alexander 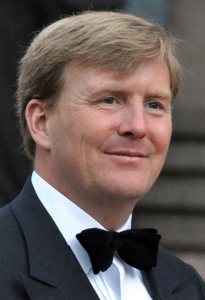 King Willem-Alexander in Stockholm, Sweden, in 2010. (Photo by Holger Motzkau)

There was much rejoicing by the Dutch people on the 27th April 1967 when the Royal Court circular announced that a son had been born to Princess Beatrix, the eldest daughter of HM Queen Juliana and the princess’s new husband, Prince Klaus (formerly Claus Von Amsberg, a one-time diplomat born in Germany). The news of the little Prince’s birth was greeted with great joy not only by the country as a whole but also in the royal family, since it was the first time a son had been born in the royal family since the birth of the third son of King Willem III in 1851. The birth of the new prince also meant that the country would one day have a king—something that had not occurred since the reign of King Willem III, from his accession in 1849 until his death in 1890. As the firstborn son to then-Princess Beatrix, heir presumptive to the Dutch throne, the little prince was third in line to succeed his mother one day.

The life of Willem-Alexander Claus George Ferdinand was chronicled from its very first day, but it was hoped that he would have as normal an upbringing as possible for a prince and would-be king. Aside from Willem-Alexander, two younger brothers were born to Princess Beatrix and Prince Claus: their second son, Prince Friso, was born in 1968, and their third child, Prince Constantijn, was born in 1969. It has been said that the three brothers were close and enjoyed a very ordinary family life with their parents.

In 1980, their grandmother, Queen Juliana, announced that she intended to abdicate on her 71st birthday after a reign of 32 years. This meant that Prince Willem-Alexander’s mother would become queen, and he would be known as the Prince of Orange—the traditional title accorded to the heir to the Dutch throne as well as the next in the line of succession. At the age of just 12, the young prince earned remarks from the press that he seemed to be handling his new status and responsibility rather well and with a noticeable maturity.

As well as attending schools in the Netherlands, Willem-Alexander attended college in Wales. He eventually went on to study history at Leiden University from 1987, and received his MA doctorate in 1993. Between secondary school and his university education, Willem-Alexander performed military service in the Royal Netherlands Navy from August 1985 until January 1987. Willem-Alexander was promoted to lieutenant commander in 1995 and to lieutenant colonel in 1997, colonel in 2001. He finally attained the rank of brigadier general in 2005.

The prince’s official royal duties began in 1985, when he reached the age of 18. He also became a member of the Council of State of the Netherlands, the highest council of the Dutch government, which was chaired by the head of state, his mother, Queen Beatrix.

By 1999, Prince Willem-Alexander met the young woman who would eventually become his wife: Maxima Zorreguita, an Argentinian who was a marketing analyst working for a variety of high-profile investment banks. They initially met in Seville, Spain, during the city’s traditional spring fair. They met once again in New York, where they began their relationship; the couple finally announced their engagement in March 2001, with their wedding planned for February 2002. Their first child, Princess Catharina Amelia, was born in December 2003, followed by two more little princesses: Alexia in 2005, and their last child, Ariane, in 2007.

As her mother had done nearly 33 years before, Queen Beatrix announced on her 75th birthday that she would abdicate on the 30th April, the exact date she herself acceded to the Dutch throne in 1980. After a 123-year span of time in which the Netherlands saw a succession of three queens regnant, a king would be welcomed by the Dutch nation. The Prince and Princess of Orange were present during the moment Queen Beatrix signed her instrument of abdication on the afternoon of the 30th April, making Willem-Alexander King of the Netherlands. His investiture took place hours later, where the new king swore allegiance to the Dutch constitution and was recognised as the new Dutch head of state by the four constituent parts of the Kingdom of the Netherlands, including Aruba, Curacao, and Sint Maartn. Subsequently, his eldest daughter, Catharina Amalia, has been invested with the title of Princess of Orange and is next in the line of succession.

The king has been intensely involved in both international water conservation and the provision of clean water to parts of the world where it is crucially scarce. He became chairman of the Advisory Committee on Water to the Dutch Minister of Infrastructure and the Environment from 2004 until his accession in 2013. The king was also an honorary member of the World Commission on Water for the 21st Century and patron of the Global Water Partnership, a body established by the World Bank, the United Nations, and the Swedish Ministry of Development. He was also appointed chairman of the UN Secretary General’s Advisory Board on Water and Sanitation on 12 December 2006.   ❑
Share: