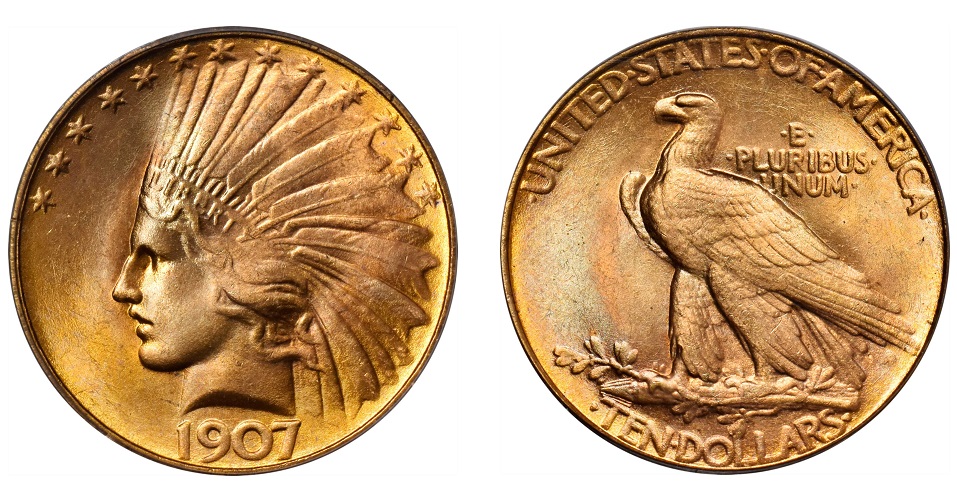 Costa Mesa, CA — Stack’s Bowers Galleries sold nearly $37 million in United States coins and paper money in their Spring 2022 Showcase Auction, surpassing pre-sale estimates by nearly 60% and setting hundreds of records in the process. The sale was highlighted by a quartet of gold treasures including the $1.1 million 1907 Rounded Rim $10 and the $840,000 1907 Wire Rim $10 from the Zito Collection, the unique Daniel Morgan at Cowpens gold medal that earned $960,000, and the incredible Fairmont-Hendricks 1870-CC double eagle that sold for $840,000. Each set a new record for the type or category, confirming Stack’s Bowers Galleries’ continuing leadership as auctioneers of world-class rarities as the firm approaches its 90th year serving collectors. Overall, 45 individual lots reached six-figure prices in this Official Auction for the Whitman Coin & Collectibles Spring Expo, with five lots surpassing $500,000.

Live bidding began with Numismatic Americana on April 4th, where the Daniel Morgan at Cowpens gold medal sold for $960,000 and set a new world record for the most valuable American historical medal ever sold. This new record comes less than a year after the firm established the previous record of $600,000 for a William Henry Harrison Congressional gold medal in their August 2021 sale. This piece was accompanied by many other rarities including a newly discovered 1777 Horatio Gates at Saratoga silver medal that earned $72,000 and a near-Mint 1797 Washington General Grand Master Masonic medal that sold for $84,000. Complete prices realized for Numismatic Americana can be found here.

Offered the following evening, April 5th, was the incredible Dr. Paul and Rosalie Zito Collection which realized nearly $4.3 million for just 88 lots, an average lot value of nearly $49,000. It was highlighted by an incredible pair of “pattern” 1907 Indian $10 eagles including a 1907 Wire Rim that sold for $840,000 and a 1907 Rolled Rim that earned $1.1 million, both prices nearly double the prior auction record. An incredible Specimen-65 (PCGS) 1795 Draped Bust, Centered Bust dollar also set a new record as the most valuable example of the variety at $780,000. Complete prices realized for the Dr. Paul and Rosalie Zito Collection can be found here.

Also presented on April 5th was the firm’s Rarities Night session which realized $8.2 million. An incredible 136-ounce Kellogg & Humbert gold ingot from the S.S. Central America shipwreck realized the top price of the session at $372,000, followed closely by a Proof 1870 double eagle that set a new record of $360,000, nearly three times the prior record. The Huberman Collection of three-dollar gold pieces presented a virtually complete date set comprising 44 coins, highlighted by the finest known Proof 1866 which brought over four times the previous record when it sold for $192,000. A near-Mint 1808 quarter eagle from the Pieper Collection set a new record for the grade at $192,000, while an 1807 quarter eagle from the Andrew M. Hain Collection sold for $156,000, nearly twice the prior record. Accompanying these record-setting gold coins was an incredible 1909-S V.D.B Lincoln cent that realized $168,000, as well as a beautifully toned 1923-S Monroe half dollar which sold for nearly three times the prior record at $102,000.

The Rarities Night session was brought to a close with an unprecedented selection of physical cryptocurrency, including Bitcoins and Litecoins from the Lealana and Casascius series, that realized over $525,000 for the 16 lots. Each physical crypto coin realized a significant premium above its face value, with some premiums approaching 700%. Highlights included a 2013 Lealana “Gold B” one-Bitcoin (BTC) that set a new auction record at $108,000 and a 2011 Casascius “Error” one-Bitcoin (BTC) that sold for $78,000, also a new record for the issue.  Complete prices realized for the Rarities Night session, including Bitcoins and other cryptocurrency, can be found here.

The Hendricks Set from the Fairmont Collection, sold on April 7th, was the most highly anticipated cabinet of Liberty Head gold coins to be offered in recent years. Presented across 506 lots, it featured a nearly complete collection of $5, $10, and $20 Liberty Head gold coins with additional selections from the Classic Head, Indian Head, and Saint-Gaudens series. The Hendricks Set realized a total of $13.6 million, with 70% of the lots setting new auction records for the grade or overall issue. An 1870-CC double eagle sold for $840,00, more than twice the existing record, while an 1875 half eagle also doubled the prior record at $480,000 and an 1864-S half eagle realized nearly 50% above the prior record at $264,000. These highlights were accompanied by 350 additional record-setting results, making this offering of the Henricks Set a historic evening for collectors in these series. Complete prices realized for the Hendricks Set from the Fairmont Collection can be found here.

Stack’s Bowers Galleries is now preparing the catalog for their June 2022 Showcase Auction of U.S. Coins, scheduled to be posted online by May 13. The firm is also accepting consignments to their August 2022 Global Showcase Auction that will present items across every numismatic area including U.S. coins and paper money, Numismatic Americana, World and Ancient coins and paper money, and physical cryptocurrency. This event will also feature lot viewing at the ANA World’s Fair of Money in Rosemont, Illinois. In addition, the firm offers monthly Collectors Choice Online Auctions in every category, providing a convenient venue for the quickest sale and the quickest payment at the strongest prices. To consign your collection to an upcoming auction, contact Stack’s Bowers Galleries today at or 800-458-4646.