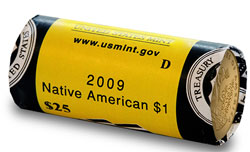 With the year drawing to a close, some of the United States Mint’s products are beginning to sell out. Their offerings for 25-coin rolls of the 2009 Native American Dollar from the Denver and Philadelphia Mints sold out yesterday and today, respectively.

The United States Mint began offering 25-coin rolls to collectors beginning on January 15, 2009. The rolls were available from either the Philadelphia or Denver Mint and priced at $35.95 each.

As of the most recent weekly sales report, the United States Mint has recorded sales of 59,000 of the Philadelphia Mint rolls and 53,732 of the Denver Mint rolls.

Next year’s Native American Dollar will have a reverse based on the theme “Government – The Great Tree of Peace.” The recently unveiled reverse design depicts the Hiawatha Belt, which is a visual record of teh Haduenosaunne or Iroquois Confederacy.