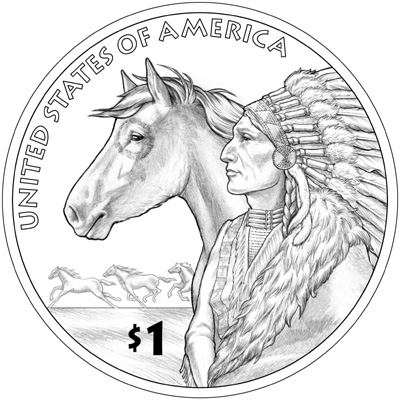 The theme for next year’s design is “Trade Routes in the 17th Century”. The selected design features a Native American and horse in profile, with three horses running in the background, representing the historical spread of the horse. Inscriptions include “United States of America” and the denomination “$1”. The reverse was designed by Thomas Cleveland and sculpted by Phebe Hemphill.

The obverse of the coin will feature the depiction of Sacagawea and child, designed by Glenna Goodacre. This design has been used for the preceding Sacagawea Dollar series from 2000 to 2008 and the Native American Dollar series from 2009 onwards. Currently, the inscriptions “Liberty” and “In God We Trust” appear on the obverse. The date, mint mark, and “E Pluribus Unum” appear on the edge of the coin.

This year’s reverse design was selected from a field of thirteen different design candidates provided by the United States Mint. Earlier this year, the candidates were reviewed by the Commission of Fine Arts and Citizens Coinage Advisory Committee. Additional reviews and input were provided by the Committee on Indian Affairs of the Senate, the Congressional Native American Caucus of the House of Representatives, and the National Congress of American Indians. The final design selection was made by the United States Secretary of the Treasury.

The previous reveres designs for the Native American $1 Coin Program have featured agriculture with the “Three Sisters” method of planting (2009), government with the Haudenosaunee or Iroquois Confederacy (2010), and diplomacy with the first written peace treaty between Native Americans and the European settlers at Plymouth (2011).