In 2003, the United States Mint released their first series of commmorative silver medals to honor the 100th anniversary of the National Wildlife Refuge System. Featuring Theodore Roosevelt on the obverse and four different animals on the reverse, the series proved highly popular with collectors and sold out quickly.

President Theodore Roosevelt designated Florida’s Pelican Island National Wildlife Refuge as the first wildlife refuge in 1903 to protect egrets and other birds from extinction. Since this time, the system has grown to encompass more than 500 units covering more than 150 million acres.

At an unveiling ceremony held in March 2003, United States Mint Director Henrietta Holsman Fore said, “These designs celebrate the priceless natural treasures of our nation, and the legacy of a pioneering, visionary President who a century ago recognized the value of conserving this Nation’s precious resources.” 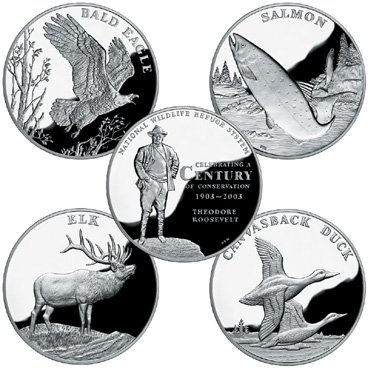 The common obverse design featured on all four medals depicted the full figure of Theodore Roosevelt standing on high ground. An inscription above reads “National Wildlife Refuge System” with additional inscriptions to the right reading “Celebrating a Century of Conservation 1903-2003” and “Theodore Roosevelt”.

The four different reverse designs depicted images of a bald eagle, elk, salmon, and canvasback duck to represent the diversity of animals that the system protects. The inscription on the reverse indicated the name of each animal.

Each silver medal was struck in a composition of 90% silver and 10% copper with a diameter of 38.10 mm and weight of 26.73 grams. These are the same specifications used for the modern commemorative silver dollars, although the medals of this series have a smooth edge. The medals were struck at the Philadelphia Mint without a mint mark and packaged in blue presentation cases with a certificate of authenticity.

The United States Mint offered a subscription program through which collectors would automatically receive each of the four silver medals as they were released. Direct sales of the first medal featuring the bald eagle began on July 24, 2003, with the three remaining medals released at intervals every four to six weeks. Pricing for each medal was $29.50 each.

As a unique selling point, the Mint indicated that the medals were the first to be produced with laser technology. This was used to create the frosted finish which the Mint referred to as “proof-like.” The technology was eventually adopted for production of the proof coins included within annual sets as well as other collector proof coins.

Maximum mintage levels were established at 35,000 for the Bald Eagle Silver Medal and 25,000 each for the other medals featuring the Elk, Salmon, and Canvasback Duck. These mintages proved to be low when compared to collector demand. According to the US Mint’s 2003 Annual Report, the medals sold out in “record-setting time.” Immediately after the sell outs, these medals enjoyed healthy premiums on the secondary market, although over time the premiums have dissipated.

Other commemorative silver medals issued by the United States Mint have included the 1993 Benjamin Franklin Firefighters Medal and the recent 2011 September 11 National Medal.