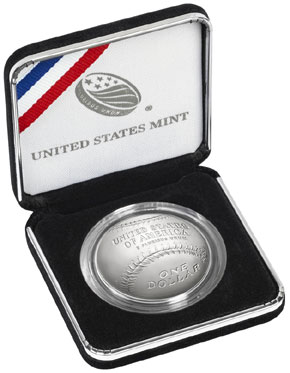 Nearly eight months after a sell out was declared, the United States Mint has resumed accepting orders for the 2014 National Baseball Hall of Fame Silver Dollars. The additional units available are the result of order cancellations due to payment issues.

The innovative shape and the subject matter were well received by collectors and sales were brisk. After a rapid sell out for the gold coin, the United States Mint indicated that they had received orders for the 400,000 maximum mintage of silver dollars by April 9, 2014. Orders continued to be accepted for placement on a waiting list until April 21, 2014 when a sell out was declared.

Following the sell out, the Mint had to cancel some orders which could not be fulfilled due to payment issues. According to the Mint, they had provided these customers with every opportunity to provide updated credit card information for possible fulfillment. The resulting cancellations have made additional Baseball Hall of Fame Silver Dollars available for sale.