As the Royal Danish Mint settles into their new home – occupying a section of the production floor previously and exclusively used for the printing of Danish banknotes – the National Bank of Denmark has launched a new gallery of Danish coins featuring all of the coinage produced under the auspices of the National Bank since 1818. Invited guests, including the interior designer of the National Bank’s lobby and the newly appointed Director of the Royal Mint were in attendance to a special reception for the launch event on the 21st August. The gallery, which is a permanent inclusion in the main lobby is a specially built, pressurized, and atmosphere-controlled cabinet which spans the length of the wall it is affixed to and includes all coins minted since the National Bank was made overseer of the Mint, taking over from the Treasury – also the year of the official establishment of the Danish National Bank. 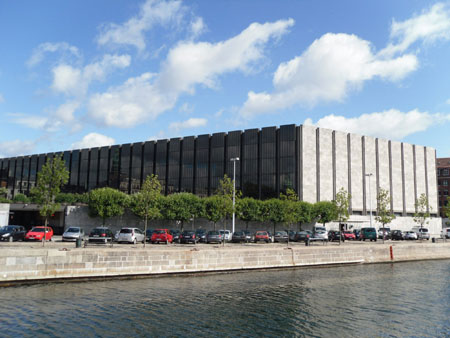 The Royal Danish Mint moved their headquarters and production facilities from their former premises located in Brøndby, a suburb of West Copenhagen. This purpose-built facility – location was the home of the Mint from 1978 until earlier this year. The move was completed in April and production of both circulation and commemorative coins has now commenced in their new Havenagade location. 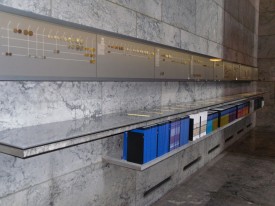 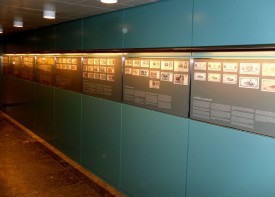 The National Bank headquarters, which takes up an entire block in Central Copenhagen, was designed by noted architect and product designer Arne Jacobsen and was built between 1965 and 1978. The previous building housing the National Bank was demolished to make room for the new state-of-the-art facility now occupying the location. Across from the Copenhagen Stock Exchange, on the other side of the Inderhavnen Canal, the distinctive trapezoid-shaped structure with its 5 floors blends both modern and contemporary with the tradition of natural stone marble and landscaped gardens.

The Mint’s collection, which is arranged in chronological order by reign and then by individual year, begins with the collection of the bronze, silver, and gold circulation coins of King Frederik VI (1808 – 1839). The display also includes the complete collection of all the commemorative 2 Kroner silver coins, (a favorite series with collectors) first minted in 1888 – on the occasion of the 25th year of reign of King Christian IX (1863 – 1906) and up to the last one issued in 1958 on the occasion of the 18th birthday of the then-princess Margrethe, heir to King Frederik IX. 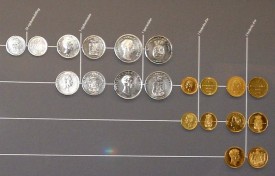 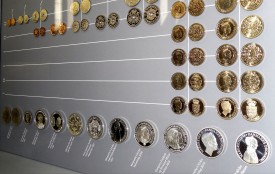 Featured is the most up-to-date circulation and recent commemorative coins of Denmark’s current head of state, Queen Margrethe II who celebrated her 40th year of reign on the 14th January. The first crown-sized silver coin minted since 1972 was issued in 1990 celebrating the 50th birthday of Queen Margrethe II, this distinctive coin included a more casual portrait of the Queen wearing a hat rather than a crown and is considered as ground-breaking in the design for contemporary Danish coinage. The most recent large silver coin was issued for the 40th year jubilee and is the last coin displayed.

The launch of the Bank’s new numismatic gallery Coincided with the announcement of a new governor to the National Bank – that of Lars Rohde. Mr Rohde is the current CEO of the Danish pension fund, ATP and was chosen as the new governor by the government’s appointment and Organisation Committee as the current serving governor, Nils Bernstein reaches the mandatory retirement age of 70. Mr. Rohde assumes his new duties from the 1st February 2013. 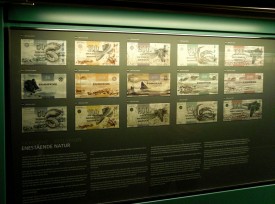 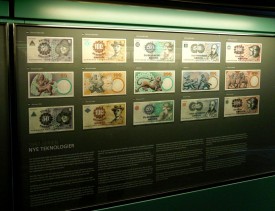 The new gallery, which is open to the public during regular business hours, is the latest addition of displays located in the Bank, the banknotes issued by the National Bank since its founding is also on display and can be viewed on the walls of the corridor leading to the commercial desk where visitors can purchase the latest coins, mint & proof sets as well as silver and base metal proof coins. The new silver 500 Kroner proof coin, minted to celebrate the 40th anniversary of the Queen’s accession is available for its face value and the currency notes of the Faeroe Islands are also available for their face value. If you are visiting Copenhagen, it is well worth the walk down to the waterfront and feast your eyes on the scenery & atmosphere which is Copenhagen, the quintessentially Scandinavian architecture & interior and of course the Bank’s and Mint’s currency collection now under one roof. Remember to visit before 1:00pm during the week in order to avail yourself of the commercial counter!

My thanks go to Mr. Henrik Kolding, Manager and Mr. Jørgen Strandgaard, Director of the Royal Danish Mint for their kind hospitality and for additional information included in this article.

All photos courtesy of Michael Alexander. © 2012.