The Perth Mint of Australia has released the fourth coin with the Mythical Creatures series featuring the Werewolf. The one ounce 99.9% pure silver proof coin carries a limited mintage of 5,000 pieces. 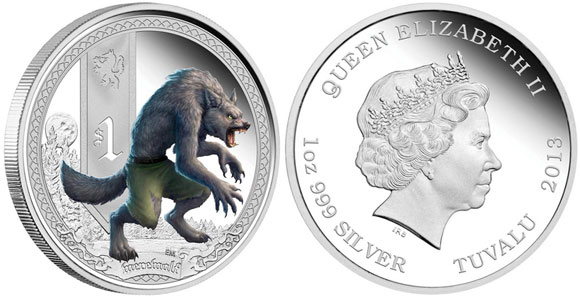 The reverse design of the coin features a color depiction of a werewolf as it fiercely prowls in a dense forest beneath a full moon. A medieval banner contains the silhouette of a werewolf and the denomination of “$1”. The inscription “werewolf” appears on a stylized scroll beneath.

The obverse of the coin contains the Ian Rank-Broadley effigy of Queen Elizabeth II with the precious metal weight and fineness and “2013” date. The coins are issued as legal tender under the authority of the Government of Tuvalu.

Each coin comes housed in a brown presentation case with illustrated shipper and numbered certificate of authenticity. No more than 5,000 of these coins will be released for sale worldwide.

Previous releases of this series have featured the Griffin, Unicorn, and Phoeniz. The fifth and final release of the series will feature the Dragon.