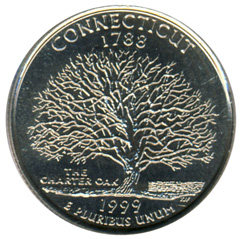 When I was a child, my coin collection was comprised of only Lincoln cent books, so figuring out if I had a 1978-D cent was as easy as grabbing the appropriate book and taking a look. Nowadays, I have books for all currently-minted U.S. coins, as well as dozens of government-issued sets and loose coins.  In addition, the collection is not always within arm’s reach to allow me to easily determine any specific coin.

To deal with this, I maintain a number of Google spreadsheet files to address the remote access issue, but I wanted a method of knowing if that coin is in a Whitman book, or in a Mint Set, or possibly a slabbed coin.  For this,  I created a classification system to use as a tag for the coins.  Each tag is a letter followed by a series of numbers and letters.  The initial letter is one of the following:

Since the books cover all different denomination of coins, I use an additional letter after the ‘B’.  I used the Roman numeral that represents the appropriate number of cents the coin is valued, ‘I’ for cents, ‘V’ for nickels, et cetera, with the exception of quarters, where I used ‘Q’.

After the two letters is a book number within the denomination.  I numbered them based on the age of the coins they are intended to hold: BI1 is the Flying Eagle and Indian Head cent book, BI2 contains 1909-1940 Lincoln cents, BI3 is 1941-1973, and so on.  The only exception to this is the quarter books.  When I started using this classification method, I only had books for the 50 State quarter program, so they were given BQ1, BQ2, and BQ3.  Since then, I acquired a substantial amount of earlier quarters, but I did not have the properly-dated books for them, so I combined blocks of quarters from different time periods and re-labeled the interior text to match the coins.  Following the book number is the position number in the book, just two more digits, so my 1974-S Lincoln cent is BI390.

The various types of sets (Mint, Proof, and Souvenir) posed a different challenge: one purchased item, say the 1976 Philadelphia Mint set, contains six coins.  I track both the set as a whole (given the serial number M001), then note each coin with a subsequent number, by denomination order, so the Lincoln cent in that set is M0011, the Jefferson nickel is M0012, and so on.  This way, I can remove any individually-collected coins in the appropriate books or 2×2 holders and use that money to purchase more coins, as the Mint Set specimens will be in better condition that most anything I can obtain from circulation.

Your collection might be modest, like just Lincoln cents or the 50 State quarters, and doesn’t need such a complicated system, but if your collection grows to many denominations, or you start purchasing coins in government packaging, you may want to adopt something similar to manage your inventory.