On May 4, 2011, the US Mint began sales of the 2010 America the Beautiful Quarters Three-Coin Set featuring Mount Hood National Forest Quarter. 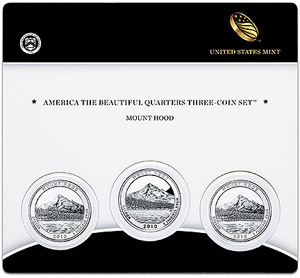 The Mount Hood Quarter features a view of Mount Hood with Lost Lake in the foreground. This representation of the National Forest was designed and sculpted by Phebe Hemphill. The obverse of the coin carries a portrait of George Washington designed by John Flanagan.

The three-coin set contains one example of the coin each struck at the Philadelphia, Denver, and San Francisco Mints. The first two coins carry an uncirculated finish, while the final coin is struck in proof. The coins are mounted on a plastic display card with issuance information and a certificate of authenticity on the back.

Pricing for the sets is $14.95 plus applicable shipping and handling. Orders may be placed online at http://www.usmint.gov/catalog