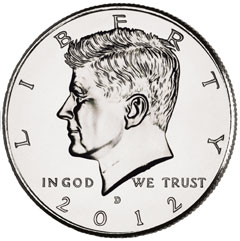 This year the United States Mint will produce circulating-quality coins with 33 different combinations of designs and mint marks. In an unusual twist, fewer than half of these coins will actually be released into circulation. This situation arises due to separate sets of circumstances across various coin series.

The Kennedy Half Dollar has not been produced for circulation for more than a decade. Over time, the use of the denomination within commerce had declined and mintages dwindled. Starting in 2002, the US Mint stopped producing the coins for circulation, however they continued to produce a limited number of coins to fulfill demand from collectors. This year’s circulating quality 2012 P&D Kennedy Half Dollars are sold by the US Mint in two roll sets or 200-coin bags, priced at a premium to face value.

Late last year, the Treasury Department announced the suspension of production of Presidential Dollars for circulation. Since the program began in 2007, a stockpile of more than 1.4 billion coins had accumulated at Federal Reserve Banks. As a cost savings measure, further production for circulation would be suspended, although the US Mint would continue to produce the coins necessary to meet demand from collectors.

The four different 2012 Presidential Dollars struck at both the Philadelphia and Denver Mint are sold by the Mint in rolls, 100-coin bags, 250-coin boxes, 500-coin boxes, and a four coin set scheduled to be released tomorrow. Each of these products are priced at a premium to face value.

In the most recent development, the US Mint has produced 2012 America the Beautiful Quarters across five designs in circulating quality with the “S” mint mark. These coins were created in order to make a new numismatic product carrying the “S” mint mark. Accordingly, these coins will not be released for circulation, but only sold in rolls and 100-coin bags.

The United States Mint’s 2012 coins that are actually released for circulation include only the cent, nickel, dime, and five different quarter designs struck at the Philadelphia and Denver Mints.