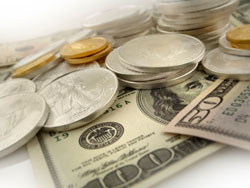 The politicians in Washington are beginning to see that their tens of trillions of dollars of bailouts and guarantees over the past few years have failed to save the economy. Now the rumblings emanating from the nation’s capital are that another round of quantitative easing (which used to be properly described as a huge increase in the money supply) may be needed to save the day. Never mind that the tactic of quantitative easing has already been tried by the current administration, spending trillions of dollars in the process, with virtually no sustainable results to show for it.

It does not make sense to repeat the same failed tactic multiple times and somehow expect a different result the next time it is tried. This thinking is similar to people with strong pre-conceived ideas who reject out of hand (or refuse to even seek out) any facts that don’t fit in their worldview. The reporting of the action for gold and silver market trading yesterday provided a prime example of the uninformed refusing to dig deep enough to understand what is really happening before they express their opinions.

Unfortunately, trading activity in precious metals markets is not fully transparent. Perhaps the best disclosure that was achieved ended a few years ago in the Tokyo TOCOM market, where previously the net long and short positions of each major market participant was reported publicly at the end of each trading day. If one or more banks or brokerages were establishing a significant long or short position, other traders quickly learned about it. This relative transparency made it possible to detect that Goldman Sachs was persistently reducing their positions of short gold positions on the TOCOM, which took about two years to eliminate.

The COMEX is far worse at disclosure. Sure, there are daily reports of the total volume and the net open interest. You even get trading volume broken down by times of day. Once a week, there is a three day old Commitment of Traders report delineating total positions broken down between speculators (investors) and commercials (brokerages and banks). Once a month there is a report of the net positions disclosing the trading positions held by four or fewer banks, the ones that hold the greatest number of contracts.

These COMEX reports are a long way from the daily disclosure of trading positions of the largest traders, such as the TOCOM used to do.

In the absence of such disclosure, you need information from the traders active on the floor who are witnessing who is buying or selling. By repeated observation, for instance, certain traders can be identified as acting on behalf of the US Treasury. Then there are reporting services to which major banks and brokers can subscribe that even identify the major traders who are involved with each specific trade. This information is available only to those with the inside contacts in the industry to glean this data or to those with deep enough pockets to pay for the information—not to the general public.

Let’s look at the July 1 trading on the COMEX silver market to demonstrate how different interpretations are possible. During the day the open interest declined by 736 contracts to 127,254. Total trading volume was 46,390 contracts. Since each contract represents 5,000 ounces, another way to state that data is that the open interest dropped by 3.68 million ounces to 636.27 million ounces and that trading volume was 231.95 million ounces. In COMEX warehouse stocks the registered (dealer) inventories rose about 1.53 million ounces while the eligible (investor) inventories fell about 1.06 million ounces. The net inventories increased about 470,000 ounces for the day, only the second time in the prior eleven trading days that total COMEX inventories increased. I do not have information if any of the inventory changes on July 1 were attributed to unexplained “adjustments” rather than the movement of physical silver.

One interpretation of this data could be that there was little activity, on balance, in the COMEX silver markets as the open interest only changed 0.6% and the net total inventory only increased by 0.4%. That would be the easy analysis from readily available data—but it would also be an incorrect conclusion.

Actual trading patterns showed that a large number of commercials sold short on July 1 (mostly JPMorgan Chase and those traders who cooperate with JPMorgan Chase’s manipulations as an easy route to quick profits) while speculators (a large number of investors) bought the contracts that were being sold. There was a relatively small amount of trading where speculators with long positions bought a short contract to wipe out their position. This analysis, supported by data that is more difficult to obtain, supports the thesis that the price of silver was forced down rather than reacting to free market influences.

What such detailed trading data does not show is the breakdown of trading done in reaction to general market activity versus trades seeking to suppress prices. Generally, there is downward pressure on precious metals prices when the stock markets fall, some of which may happen as investors liquidate profitable positions to cover margin calls on other assets.

Lower gold and silver prices would generally make it easier for the federal government to push for another round of quantitative easing (“See, things aren’t so bad for the economy, as the low gold and silver prices show.”) Lower precious metals prices also intimidate some investors away from unloading their paper assets and into tangible assets like gold and silver. If government officials are aware of forthcoming horrible economic news (like poor jobs reports, a falling real estate market, sovereign debt problems, forthcoming bankruptcies, and the like), they have an incentive to diminish the risk that the public will spurn the US dollar, stocks, and bonds and opt for gold and silver—by making precious metals less attractive.

As the mainstream media has been reporting to the public this week, there have been extensive kinds of poor economic reports being released. This gives the US government a stronger than usual incentive to suppress gold and silver prices. So, some of the decline in gold and silver prices yesterday is no doubt due to a genuine reaction to the falling stock prices. However, I suspect that there were also major efforts to knock down precious metals prices to help protect the value of the US dollar and to help pave the way for another round of quantitative easing. Stay tuned for developments.