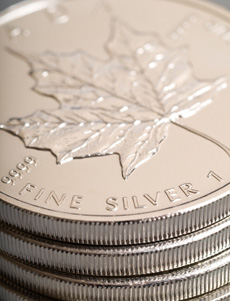 Last Thursday, the US Mint sent a fax to its primary distributors informing them that supplies of the 2010 Gold Buffalo bullion coins had been sold out, as previously reported by CoinUpdate.com. The Mint stated that no additional inventory of 2010-dated coins would be available. Already, premiums are up slightly as some buyers scurry to obtain pieces.

Also, the Royal Canadian Mint has stopped striking 2010-dated Silver Maple Leafs. Orders now being received from the RCM’s primary distributors will be filled with 2011-dated coins, which should be released within a month. It happened that this cut off surprised some dealers who had accepted orders to deliver 2010-dated pieces, but not yet covered their commitments. As a result, premiums for Silver Maples are up slightly. If physical silver shortages develop in the next few weeks, the 2011-dated coins may remain at higher premium levels indefinitely.

In our stores yesterday and today, we made about as many purchases from the public as we have done in any day thus far in 2010. We also continued to see an uptick in retail purchases of gold and silver bullion-priced products.

In case readers had not noticed, The Wall Street Journal (WSJ) has mostly played down activity in the gold market. Over the years, the WSJ has often simply not reported significant developments for gold. Of the times when positive news was reported, it was often buried at the very end of the commodities column. About the only time that gold news would get a headline was if it was to report a negative story.

In the past few months, that slant in coverage of the gold market may be changing. Just today, a WSJ reporter who writes for the “Money and Investing” section called to interview me about the end of production of Gold Buffaloes and the demand for gold in general. I’ll just have to wait and see if this story ever appears and what angle it might take.

Now that gold and silver have both topped the target prices (over $1,300 and $20.69) I predicted by the end of September, we are closer to the days when prices could rise even more sharply. While the general public has little awareness or concern about owning precious metals, that leaves huge potential for much higher demand in the coming months.