You can read about authentic California coinage by clicking here on a CoinFacts page citing BG numbers for authenticity. (“BG” are the first initials of surnames of Walter Breen and Ron Gillio, authors of California Pioneer Fractional Gold.) According to CoinFacts …

… throughout the early years of the California gold rush there was a constant need for coinage to satisfy the commercial needs of a booming community being based on gold dust. … Over 450 varieties are known to exist, some undated but most bearing dates between 1852 and 1882.

This language appears on several numismatic websites, sometimes without citation of PCGS CoinFacts. Auctioneers on Proxibid, for example, have used it to describe gold plated base metal fakes of California gold. In cases like these, we always give auctioneers the benefit of the doubt because sometimes they are unaware about replicas and fakes, especially when they are holdered by bottom-tier slabbing companies. We have not knowingly encountered a Proxibid auctioneer purposefully selling worthless tokens as California gold. We have reported several items, and in each case, the auction company removed the lot.

Not so with eBay, which made a big numismatic splash last year announcing that replicas and copies of coins no longer will be allowed on the portal.

However, eBay sellers continue to be the most atrocious resellers of fake California gold coins and replicas thereof. Almost half of 472 lots titled “California Gold” in a recent eBay search were fake or replicas. 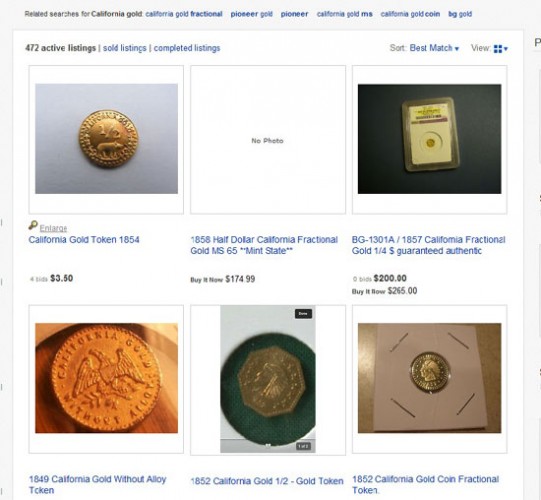 We often point out that sale of numismatic replicas may violate the U.S. Hobby Protection Act, which states:

The manufacture in the United States, or the importation into the United States, for introduction into or distribution in commerce of any imitation numismatic item which is not plainly and permanently marked “copy”, is unlawful and is an unfair or deceptive act or practice in commerce under the Federal Trade Commission Act [15 U.S.C. 41 et seq.].

Often, every word of the description of a fake California gold token is erroneous, as in “1856 California Gold 1/2 Dollar Coin Great Shape.” (Click photo to expand.)

The copy was not made in 1856, it was not mined in California, it is not gold, it is not 1/2 dollar, and it’s in great shape because it was manufactured recently. Most important, it is not a coin. Most likely such a lot is probably brass or plated metal. If the coin bore a denomination, such as 1/2 dollar–a term protected by the US Government–then it would be a counterfeit.

Sellers on eBay seldom cite the BG number of California Gold, meaning you have to know how to discern real from fake ones yourself. Here is a correct description of an 1871 gold quarter dollar, with the eBay seller identifying it as BG-838.

Because of my coverage of coins offered on the auction portal Proxibid, I have made auctioneers on that portal aware of fake California gold. Proxibid is concerned about the selling of replicas and fakes that are not clearly marked as such. Its company representative has stated that it tries to maintain a high degree of quality control, something that I can attest to personally, because I have purchased close to a half dozen counterfeits on the portal. In each case, Proxibid has helped resolve the problem so that I was reimbursed.

Further, Proxibid auctioneers are held to standards by the company’s Unified User Agreement, which states:

More recently, Proxibid has added a “Report this Item” button so that users like me can report suspicious coinage.

To check to see if your California gold is real or replica, look to the reverse. If you see a bear, or an animal that could resemble a bear, with a fraction (1/4, 1/2) or the word “One” without a denomination (as in “25 cents,” “50 cents,” “dollar” [sometimes abbreviated as “Dol.” or “D.”]), chances are you have a brass or plated token. Some collectibles that resemble fractional gold feature a western theme and are marked “Charm”; they are often made of gold.

You cannot be sure of the authenticity of any token using the words “California gold” without a denomination. The best way to guard against the sale of replicas and fakes is to subscribe to CoinFacts, which has a comprehensive and updated list about the real deal.

For more information on fake California gold, see the most accessed article on my site, Proxiblog, by clicking here.