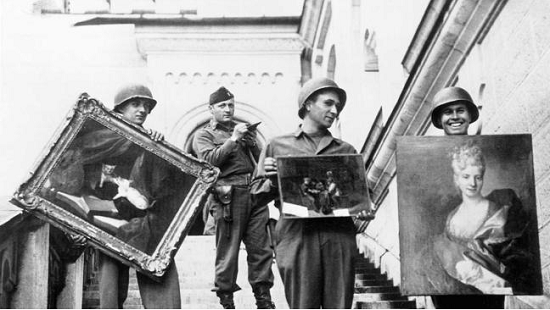 Today, October 22, Congress honored 345 men and women of the World War II-era Civil Affairs and Military Government Divisions of the Allied Armies who worked to preserve and retrieve nearly 5 million artifacts and artworks in Europe in the mid-1940’s. Four surviving members of the group, known as the Monuments Men, attended the ceremony in which they were awarded a Congressional Gold Medal, bronze replicas of which are now available for sale at the U.S. Mint. 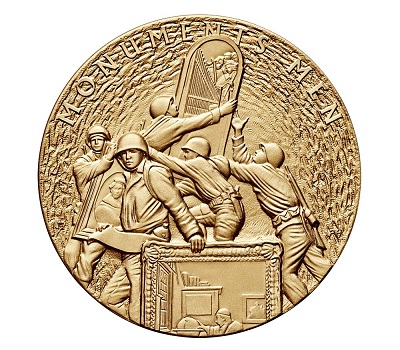 Initially charged with the task of restoring art, artifacts, and churches damaged in combat, the Monuments Men went on to catalogue and repatriate millions of pieces stolen by the Nazis. A press release from the Mint notes that they recovered some of the world’s most important works of art, including paintings by Rembrandt, van Gogh, and Leonardo da Vinci.

The obverse of the medal, which was designed by Joel Iskowitz and sculpted by Phebe Hemphill, features soldiers retrieving a cache of stolen artworks from inside a cave. MONUMENTS MEN is inscribed along the top of the design.

Curving along the rim of the reverse are depictions of famous paintings preserved by the Monuments Men, with the inscription ACT OF CONGRESS 2014. Its center carries a quote from Dwight D. Eisenhower: IT IS OUR PRIVILEGE TO PASS ON TO THE COMING CENTURIES TREASURES OF PAST AGES. The reverse was designed by Donna Weaver and sculpted by Joseph Menna. 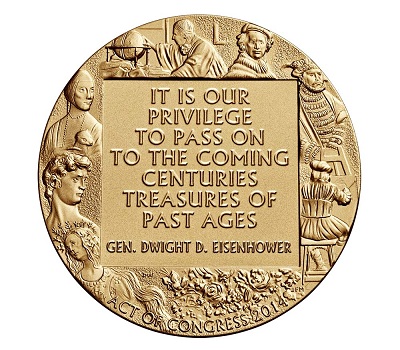 The bronze medal is available in two sizes: 3-inches in diameter for the price of $39.95, and 1.5 inches for $6.95. The U.S. Mint’s Web page for the smaller medal is not accessible at the time of this writing.

For more information, visit the U.S. Mint’s page for coin and medal programs.