The Congressional Gold Medal was presented collectively to the Montford Point Marines at a ceremony held in the U.S. Capitol Rotunda on June 27, 2012. The medal was awarded in recognition of their personal sacrifice and service during World War II.

On June 25, 1941, President Franklin D. Roosevelt issued an Executive Order establishing the Fair Employment Practices Commission and opening the doors for the very first African-Americans to enlist in the United States Marine Corps. The first African-American recruits were trained at Camp Montford Point in Jacksonville, NC. More than 19,000 African-Americans would serve in the Marine Corps during World War II, including the landing on the island of Iowa Jima and the seizure of Okinawa. 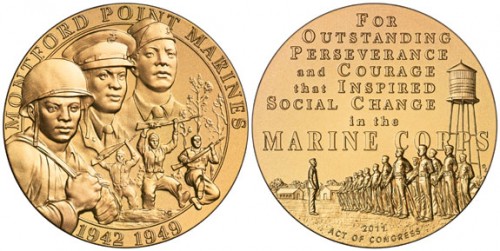 The  obverse design of the medal features three Montford Point Marines in varying uniforms with a training scene filling the lower portion of the pallete. The inscriptions read “Montford Point Marines” and the years “1942” and “1949”. On the reverse is a scene of Montford Point Marines in formation during training, with the signature water tower in the background. The inscription above reads “For Outstanding Perseverance and Courage that Inspired Social Change in the Marine Corps”, with the additional inscription “2011 Act of Congress” below. The obverse was designed by Michael Gaudioso, and the reverse was designed by Don Everhart.

This Congressional Gold Medal was authorized under Public Law 112-59. Initially, the US Mint prepared six different obverse and six different reverse design candidates, which were reviewed by the Commission of Fine Arts and the Citizens Coinage Advisory Committee. The final designs were selected by the Secretary of the Treasury.