Most of the early commemorative coins that were struck by the United States Mint were requested and released by commissions around the country, often to honor anniversaries of states or cities, or to honor important people within American history. These commissions will have a direct link to the event commemorated, but within the classic commemorative series there is one notable exception, the 1923 Monroe Doctrine Centennial Half Dollar. While the Monroe Doctrine is part of American history and certainly has reason to be commemorated, it wasn’t issued by any commission related to centennial celebrations of that event, but rather it was issued and sold by the Hollywood motion picture industry.

The obvious question that one might ask now is why the motion picture industry would want to release a commemorative half dollar in the first place, and why would that half dollar commemorate the Monroe doctrine? After all, it’s not like it has been the subject of countless blockbusters, if in fact there was even one movie indirectly related to the Monroe doctrine. It seems to have been a matter of pure coincidence and a simple case of “anything will work”. The movie industry at the time wanted to brush up their image after some “incidents” in Los Angeles in the early 1920’s and had decided that a public film exposition would be a great idea, for which a commemorative half dollar would be struck and released. Not seeking a contemporary subject, it decided to commemorate the Monroe Doctrine, simply because its centennial coincided with the first public film exposition organized. 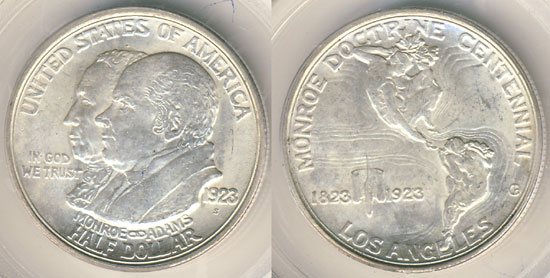 And while the subject commemorated hardly had anything to do with the exposition (if anything at all) the Monroe doctrine remains an important part of American history. The first half century after American independence was one with many changes in the politics of both North and South-America. The Spanish colonial empire, once stretching across the globe, had slowly lost all of its possessions in South-America but for a few small parts of the Caribbean. America had become a variety of different countries fully independent from European powers.

The Monroe doctrine was an American policy that put forward the idea that once countries had gained their independence from their (former) mother country no European nation could take it back, or it would meet with American opposition. Where this opposition was supposed to come from remains somewhat unclear even to this day, as the American navy and army of the 1820’s was hardly anything to write home about. Despite this, the doctrine was well received, especially by Britain, who were afraid that if Spain regained control in South-America the profitable trade with those parts of the world would cease to exist, bringing an economic blow to Britain and perhaps the United States.

Interestingly enough, the motion picture industry is not mentioned on the coin itself and it seems likely that the majority of collectors at the time were unaware of the unusual circumstances in which this coin came to be. Both sides were designed by Chester Beach, who was overseen and advised by James Earle Fraser. The obverse features the conjoined busts of James Monroe and John Quincy Adams, both important in the creation of the doctrine. UNITED STATES OF AMERICA is on top, with IN GOD WE TRUST on the left and the date of minting, 1923 on the right. MONROE-ADAMS is below the bust with the denomination right below that.

The reverse is somewhat artistic although it is generally not included amongst the most beautiful commemoratives ever minted. It shows both Americas, outlined by two female figures, with curved lines suggesting both the Atlantic and Pacific oceans. A very similar design was used as the logo for the 1901 Pan-American exposition and also appeared on a medal designed in 1899 by Raphael Beck for that exposition. Beck protested when he saw the designs of Beach, claiming that the design was plagiarized from his logo and medal, but lost his arguments when Fraser (who had suggested the design to Beach) claimed that he was unaware of Beck’s medal or the official logo of the exposition. There are some minor differences between the medal and the commemorative, but the discussion remains whether or not the design was copied directly. The reverse also displays the words MONROE DOCTRINE CENTENNIAL and LOS ANGELES, as well as the two dates 1823-1923.

A total of 274,077 coins were struck in the middle of 1923 at the San Francisco Mint (the mintmark appears on the obverse directly below the date). This is surprisingly close to the total that had been authorized by Congress, 300,000. Sales were lackluster, and while a sizable amount must have been sold to collectors for $1 each, the majority was released into circulation at face value, resulting in an abundant supply of circulated Monroe Commemorative half dollars to this day. It is unclear why it was decided to release the remaining pieces into circulation, as many other issues had the pieces that did not sell melted at a later date. The most obvious reason perhaps would be the Mint preventing the realized pieces to become instant rarities when their low mintage was realized, or perhaps it didn’t make sense financially to melt the coins. The pieces that remain in uncirculated condition are often weakly struck, lackluster or both, with even the finest specimens generally lacking eye-appeal.