The Monnaie de Paris has launched (24th June) the third series of coins which represents the current 27 regions of the French Republic, those of the 22 mainland departments and the 5 territories including those departments located in the Americas (Guiana) and in Africa (Mayotte). 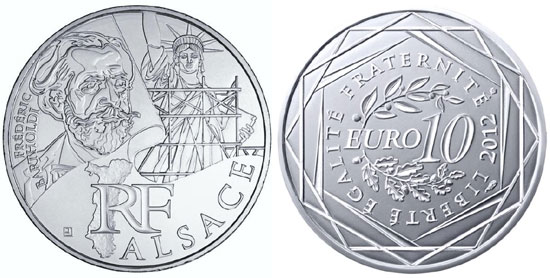 This coin program began in 2010 with the issue of regional & historic flags from all departments and continued in 2011 with the depiction of remarkable architectural & geographical sites. This year’s series is designed by artist Joaquim Jimenez of the Monnaie de Paris and depicts well known and familiar personalities who have either a connection to, or were born in the regions they represent on the coin. The series includes such luminaries as the immortal Edith Piaf, representing Isle de France which the capital city of Paris is located, Frederic Bartholdi, the sculptor of the Statue of Liberty representing the region of Alsace and, William the Conqueror himself, who united the lands of England under one crown in 1066, representing the region of Basse-Normandie. 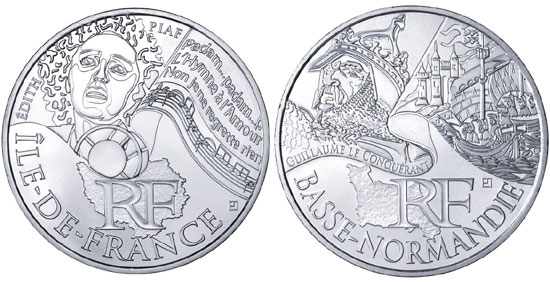 The reverse design – common to all of the coins in this series includes a wreath consisting of bay and oak leaves which surrounds the coin’s face value of “10 EURO” and also includes the national motto of “LIBERTÉ ÉGALITÉ FRATERNITÉ” (Liberty Equality Fraternity) and year of issue of “2012” which is in itself surrounded by overlapping geometric outlines.

This series, which concludes the three year long program, is now available from the Monnaie de Paris as a complete set. Struck in BU quality, the coins are minted in .500 fine silver with a weight of 10 grams and a diameter of 29 mm. Each coin has a mintage of 3,500,000 pieces.

For more information on this and other coins / sets offered by the Monnaie de Paris and to inter-act with their map of departments, please visit their website at: http://www.monnaiedeparis.fr/euros-des-regions-2012