This year’s Grand Bourse de Numismatique or the International Coin, Stamp and Postcard Fair was held on Sunday, the 1st December in the beautiful city of Monte Carlo in the principality of Monaco. The 21st year of this fair, sponsored by L’Association Numismatique de Monaco and organized by Editions Gadoury – publishers of many well-known French & European numismatic reference catalogs,  proved to be even more popular this year with collectors far & wide as the show itself was both greater in size and attendance. 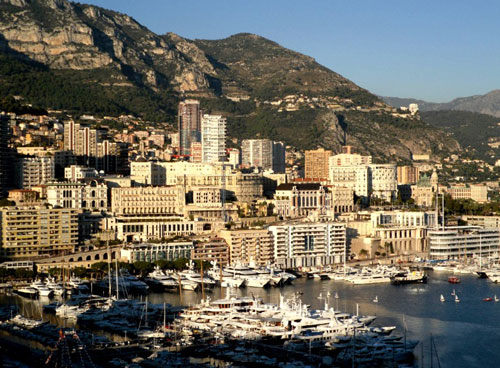 With more than 100 dealers from several countries in Europe – including a dealer from the United States for the first time, the show got off to a great start. Aside from the fair on Sunday, many collectors arrived the day before to attend the much anticipated auction also organized and conducted by Editions Gadoury. Held at the Fairmont Hotel, a favorite with many American & British tourists, more than 850 choice numismatic lots went under the hammer from ancient to medieval, Napoleonic & choice Monegasque to modern with the vast majority of the lots being sold for much more than their reserves. 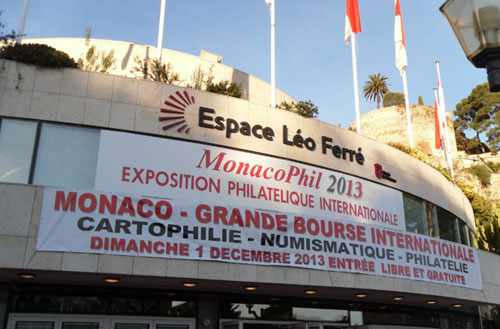 The weather in Monte Carlo lived up to its reputation, a sunny day with clear blue skies but, as the festive holidays are almost upon us – even Monaco isn’t exempt from seasonal weather conditions, with a slight chill felt in the early day December air. Before the doors opened, prospective collectors lined up at the entrance of the Espace Leo Ferre, a prime exhibition venue in the centre of Fontvielle, the newest of the four traditional quarters in the principality. 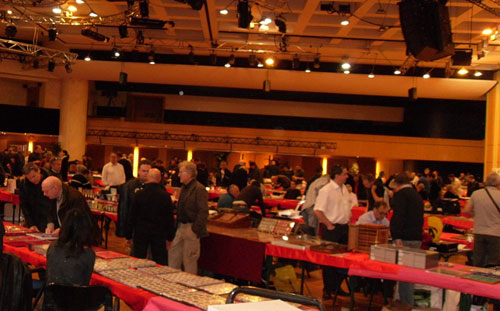 With a more open floor plan than last year’s show, the hyper-activity of the show was unmistakable, many dealers commenting on the increased level of business than in 2012 and many collectors also giving their nod of approval to the lay-out of the main auditorium. Collectors soon made their way up & down the aisles of dealers, in search of that elusive numismatic treasure or to find the bargain of the day, many to be had in both bullion-related and collector coin options. 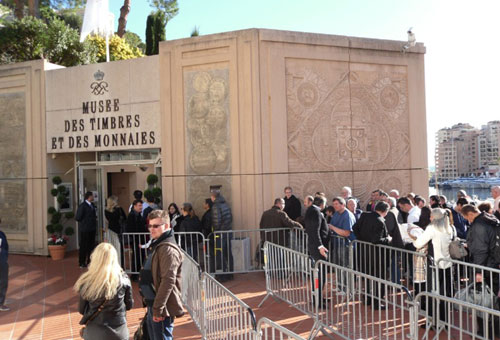 Adjacent to the Venue, just across the walkway is Monaco’s dedicated Museum of Coins and Stamps, the Musée des timbres et monnaies as it has been known as since 1996. Originally founded by the late prince Rainier III in 1950, the Museum included the philatelic collections of Princes Albert I and Louis II. The Museum held their own sale on the day, offering an official and complete set of Uncirculated Monegasque coins (9 in total) which included the commemorative 2 EURO coin marking the 20th anniversary of Monaco’s entry into the United Nations in 1993. As a line formed in front of the Museum, the sets were sold until they were all gone. A highlight of the Grand Bourse this year was the attendance of the graphic artist Alain Giampaoli, creator of the show’s publicity poster seen all over Monaco as well as surrounding areas in Nice. He was on hand to sign limited and numbered copies of the poster. 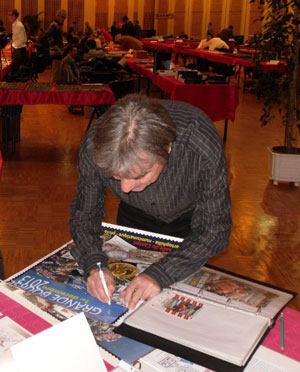 In attendance to support the stamps side of the show was Monaco’s own Office des Emissions de Timbres-Poste (OETP). Both coin & stamp collecting is taken seriously in Monaco which, for many years, relied on the revenue from the sales of coins and postage stamps to collectors world-wide. In recognition of this ever-growing activity, the OETP have issued a special commemorative postage stamp marking this year’s 21st Grand Bourse based on the publicity poster. The stamp was sold on the day in various options including first day covers and post cards. Visitors also had the chance to post a letter on the day which received a special cancellation “Bourse” mark from OETP. Next week, it’s the turn of the OETP to sponsor next week’s international stamp fair during which, a specially packaged stamp, including the Monegasque commemorative 2 EURO coin will be offered together in a folder during the event. 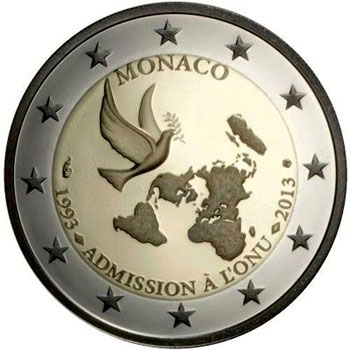 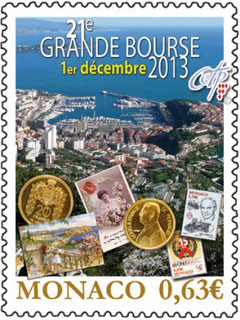 Next year’s auction is scheduled for Saturday the 6th December with the show following on the 7th, The immediate area of Monaco and the town of Beausoleil (literally on the French – Monegasque border) are serviced by the International Airport of Nice. Both locations have an array of hotels to choose from and at a price to suit every budget, a visit to this exceptional show would be a real miss on the part of any serious collector or investor. Make the effort to visit the Grand Bourse for 2014 and you’ll be adding Monte Carlo to your calendar of events annually.

For more information on the Grand Bourse show including dealer information, please visit the website of Editions-Gadoury at: http://www.gadoury.com/fra/ and the L’Association Numismatique de Monaco at: http://www.anm.asso.mc/index.php?m=accueil