The treasury of the Principality of Monaco has issued (16th May) new silver crown coins which remember what would have been the 90th birthday of Her Serene Highness, Princess Grace of Monaco. Beloved and sadly missed, the warm and generous spirit of the princess is still very much in existence in the small Mediterranean country. Her untimely death in 1982 was deeply mourned by Monegasques, Americans, and many admirers around the world. The new release is Monaco’s fourth silver Proof crown size coin since the introduction of the euro in 2002.

The Monnaie De Paris produces the silver Proof coins by special convention and on behalf of the treasury of the Principality of Monaco. The obverse side includes an image of Princess Grace, and the image is based on a photograph taken of Princess Grace by the famed photographer Yousuf Karsh in 1956. The princess is shown wearing the Van Cleef & Arpels diamond tiara crafted in platinum and set with pear-shaped diamonds, marquise-shaped diamonds, and round diamonds weighing 77.34 carats; and a Cartier Necklace crafted in platinum and diamonds, which she received as a wedding gift. Above the portrait is the text PRINCESSE GRACE DE MONACO.

The reverse side includes the design of a rose, the princess’s favourite emblem, along with the denomination of €10 and the year of issue 2019.

The coins are encapsulated and presented in a red leather presentation case with the monogram of Princess Grace on the cover and is accompanied by a numbered certificate of authenticity. For additional information about these coins and ordering, please visit the website of Le Musée des Timbres et des Monnaies de Monaco. Those interested in purchasing the coin must register as a customer before placing an order, as there is a limit of (the number) of pieces per registered customer. Orders are dispatched to European destinations only. 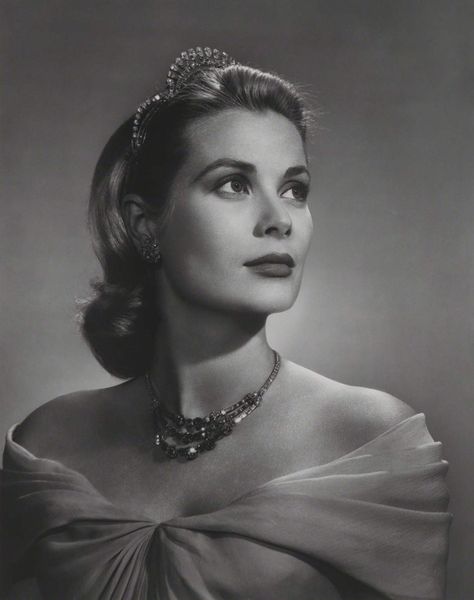 Born on the 12th November 1929 in Philadelphia, Grace Patricia Kelly was one of four children, the daughter of John B. Kelly, an Olympic medalist in rowing, politician, and successful businessman. Her mother Margaret was a competitive swimmer and community activist. Shy and gentle, her manner hid a determination to succeed in whatever endeavours she attempted. At the age of 17, the blonde and beautiful young lady applied to study at the American Academy of Dramatic Arts in New York City, perhaps an indication of an inner strength that would characterise her adult life.

Forging a career as a professional actress, Grace was featured in advertisements, live television, Broadway, and stock theatre. It would be her appearance in full-length feature movies, all made between 1951 and 1956, that would bring her international fame and intense media exposure. Her first feature movie, Mogambo, filmed in 1951, earned her a Golden Globe for Best Actress as well as her first Academy Award nomination. Grace Kelly came to the forefront in terms of her status as an A-list movie actress with her strong performance in The Country Girl, for which she won the Academy Award for Best Actress in a Leading Role in 1954. She had not only become a glamorous movie star, but Grace Kelly was also then regarded as an outstanding actress, and at the top of her profession, at the age of just 24.

It was during the filming of the feature-length film entitled To Catch a Thief, alongside her co-star Cary Grant and directed by Alfred Hitchcock, that Grace Kelly first travelled to the French Riviera and Monte Carlo. While visiting the Prince’s Palace in Monte Carlo in the spring of 1955, it was on this occasion that Grace would meet the man who would become future husband, His Serene Highness, Prince Rainier III of Monaco, for the first time. The dashing 32-year-old prince was the head of state of a small principality that many in Grace Kelly’s home country had never heard of before. Their meeting and subsequent courtship have been described as something of a whirlwind romance, with the prince proposing to his intended on New Year’s Day 1956 while Rainier was visiting Grace and her family in Philadelphia.

The announcement of the couple’s engagement was met with excitement on both sides of the Atlantic, and, with their statement, came at the same time that Grace Kelly would retire from acting to take up her responsibilities as the wife of the sovereign of Monaco, essentially, as a full-time princess. Though her fans were disappointed with this news, Americans were immensely proud that one of their own would become European royalty and represent both her adopted country as well as the United States on an even greater international stage.

The arrival of Grace Kelly, her family, and the bridal entourage on board the USS Constitution was followed by the world’s press during the entire crossing. Her disembarking in the port of Monte Carlo was an event that became one of the most significant developments ever seen in Monaco, with thousands of well-wishers lining the quay to welcome the Hollywood star who would soon be their new princess. She was also met by her fiancé Prince Rainier III, who rode with her back to the palace in an open convertible car with more Monegasques lining the streets. As per Monegasque law, the couple were married in a civil service on the 18th April 1956, in the Throne Room of the Prince’s Palace, and in the presence of immediate family and friends. After the official ceremony, the 142 official titles that the new Princess Grace Patricia of Monaco now acquired in the union, which were the counterparts of her husband’s titles, were formally recited. It would, however, be the religious ceremony that would captivate the whole world and was televised to the United States. The bride wore an exquisitely beautiful wedding gown designed and created especially for now former actress Grace Kelly by the MGM (Metro Goldwyn Mayer) studio as her wedding gift. She and the handsome Serene Prince, who was dressed in his uniform as head of the Monegasque armed forces, were married in a religious ceremony at Monaco’s St. Nicholas Cathedral on the 19th April 1956. Attended by over 700 guests, Princess Grace and Prince Rainier left that night for their seven-week Mediterranean honeymoon cruise onboard the Prince’s yacht, Deo Juvante II. Although then she was the wife of the Monegasque sovereign, Princess Grace chose to retain her American citizenship and links to the United States after acquiring Monegasque citizenship and became a dual national. Curiously, Grace was not the first American-born princess consort of Monaco. She was preceded by Alice Heine (1858–1925) the American-born princess consort who was the wife of Prince Albert I of Monaco (1848–1922). Princess Grace may not have been the first American-born princess, but she was undoubtedly the most popular princess consort.

Almost immediately, Grace set off to forge a place in her newly adopted homeland. Active in charitable organisations and daily life in Monaco, the princess’s dedication, determination, and discipline soon earned her the sincere affection of the Monegasques. She became president of the Monegasque Red Cross in 1958. Under Grace’s leadership, The Princess Grace Foundation, Monaco, was created in 1964 to encourage local artists and craftsmen. Other initiatives of Princess Grace, such as the Monaco Garden Club and International Arts Festival, have added immeasurably to social and civil life in Monaco. In between all of her social endeavours, she and Rainier found time to start a family, with their firstborn, Princess Caroline, born in February 1957, followed by their only son Prince Albert, born in March 1958, and their third and last child, Princess Stephanie, born in February 1965.

Although Princess Grace had officially retired from acting, there had been several offers to the princess for roles in movies as early as 1962 when Grace turned down the lead part of Marne and as late as 1982 by ABC Television, which showed interest in an independent film entitled Rearranged, in which Grace and Rainier had worked together in the 33-minute project, the offers coming to nothing.

Grace and Rainier hosted numerous civic and social events at the palace and paid state visits all over the world. The couple’s broad interests brought a stimulating mix of artists and visitors to Monaco with Monte Carlo experiencing a new resurrection as a primary destination for the jet-set and famous.

Tragedy struck on the 13th September 1982, when Princess Grace and 17-year-old Princess Stephanie were driving along the cliffs of the Côte d’Azur region of southern France on their way back home from their summer residence. Grace suffered a cerebral haemorrhage at the wheel and lost control of the vehicle, which spun off the cliff’s edge and plunged down a 45-foot embankment. Both Grace and Stephanie were rushed to a hospital where Princess Grace spent 24 hours in a coma before succumbing to her fatal injuries and died the next day at the age of just 52.

Her state funeral was held at the same Cathedral, where, 26 years earlier, she had married Prince Rainier at their splendid ceremony. Those who were in attendance were her husband and two eldest children (Princess Stephanie was still recovering in hospital from her injuries sustained in the auto accident which claimed the life of her mother). Also paying their respects were First Lady Nancy Reagan and many close friends of Grace from her days in Hollywood. Princess Grace was laid to rest in the princely crypts adjacent to the Cathedral of Our Lady Immaculate.

In the year of her death, she was portrayed on a commemorative 10-franc coin issued by the Monegasque Treasury, and on the 25th year of her death in 2007, an effigy of Princess Grace was included on a €2 commemorative coin. Grace Kelly, the actress, is listed 13th among the American Film Institute’s 25 Greatest Female Stars of Classical Hollywood Cinema.

The children of Princess Grace and Prince Rainier III continue their strong relationship with the country of their mother’s birth and with the Kelly family.

HSH Prince Albert II succeeded his father as Sovereign Prince of Monaco on the 19th November 2005, after the death of his father, Prince Rainier lll, at the age of 81. On the 1st July 2011, HSH Prince Albert II of Monaco married Miss Charlene Wittstock, a former Olympic swimmer born in South Africa. Their children, twins Prince Jacques and Princess Gabriella, were born on the 10th December 2014.

HRH Princess Caroline, the Princess of Hanover, is married to His Royal Highness Prince Ernst of Hanover, and together they are the parents of six children from their marriage and from previous marriages.

HSH Princess Stephanie lives in Monaco where she is raising her three children. Because of her long-time interest in the fight against AIDS and her activist presidency of Monaco-sida, she was named a special representative for Monaco to UNAIDS. She spoke to the international delegation at the 2006 high-level meeting on AIDS at the UN General Assembly in New York.