This year’s “Monaco Numismatique” show was hailed a success by both collectors and dealers alike with a steady stream of visitors passing through the doors and taking advantage of favorable prices for coins, banknotes and stamps. Those collectors arriving early enough on the 1st December – one day before the actual show were able to purchase the latest Monagasque collector coins being distributed by the Musee des Timbres et des Monnaies on the 1st and 2nd December in conjunction with “Monaco Numismatique”. 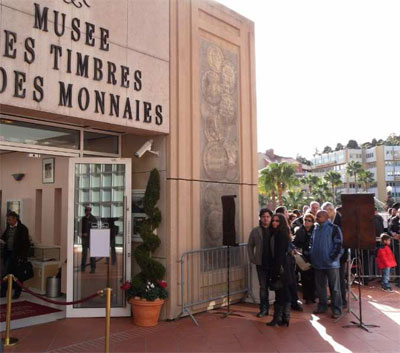 Along with the added attraction and pleasant surroundings that is Monte Carlo, a great city which may be small in size but large in activities and sights, the coin show which was held at the Salle du Canton in the Terrasses de Fontvieille – is centrally located, convenient and very easy to get to from any part of the principality or from near-by Beausoleil in France. The show also benefited from being just across the walkway from the Musee des Timbres et des Monnaies, enabling attendants to take advantage of both the show and to visit the Museum who, had organized a spectacular exhibition of rare and one-of-a-kind coins in support of the “Monaco Numismatique” show. 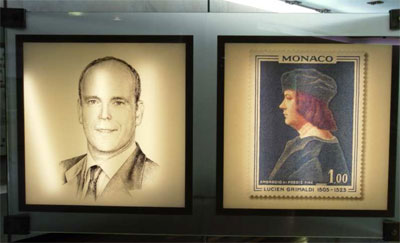 At the entrance to the Musee des Timbres et Des Monnaies is a portrait of Monaco’s current ruler, Albert II & the ruler who reigned during Monaco’s recognition of its independence, Lucien I.

Entitled “Souverainete, Seigneurie, Principaute – 1512 1612 2012”, the exclusive exhibition included the actual Letters Patent issued on the 20th February 1512 and signed by King Louis XII himself which recognized Monaco’s sovereignty – effectively acknowledging the Principality’s independence – before even being designated a Principality… and was certainly the main attraction along with Monaco’s very first coins which were first issued in 1640 and struck in the Prince’s own Royal Palace. The exhibition, including many rare and usually unseen artifacts relevant to the history of the small principality, were on display for just the two days during the issue of the two new collector coins and during the “Monaco Numismatique” coin show. Made possible with the help of the Bibliothèque Nationale de France, the Kunsthistorisches Museum of Vienna, La Monnaie de Paris and its Museum, the Archives of Lyon and Marseille, this celebratory display also included rare objects of private collectors. 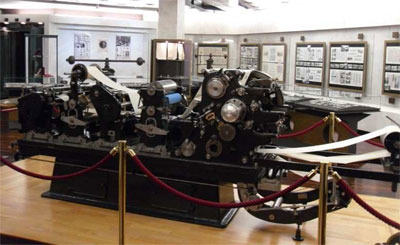 The Museum’s main feature are both their first stamp printing machine which is in the centre of the main venue – the first coin minting press is just behind the printing press.

Organized along with the Association Numismatique de Monaco, “Monaco Numismatique” is arranged and coordinated by Editions Victor Gadoury, a primary source for rare coins and reference publications located in Monte Carlo, this show on the circuit is very much-anticipated with collectors looking to take part in the pre-show auction, the show itself and often scheduling a visit to the Museum… exploring the beauty of the French Rivera is also on many agendas..! 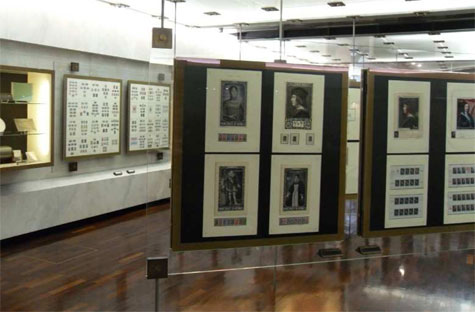 The Museum contains a permanent display of both many of the first stamps and coins which Monaco have issued for the last one hundred years – longer for their sought-after coins!

The event included more than 50 dealers from Monaco, France and surrounding countries with a few venturing from Germany, Austria and the U.K. With a high number of attendants for the one-day show, there was something for every collection, budget and specialty. Also in attendance was the L’office Des Émissions De Timbres-Poste offering the latest stamps and FDC’s along with commemorative wedding and new definitive stamps of Prince Albert II. 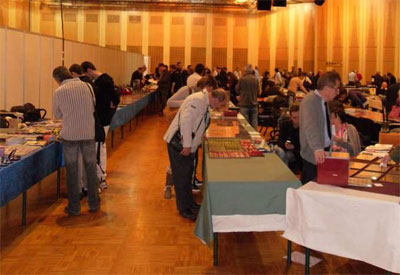 Two rooms made up the dealers, amenities also included a Bar and restaurant for refreshments.

On the first day of this two-day event, an auction also organized by Editions Gadoury was held at the Fairmont Hotel. More than 700 lots went under the hammer, there was a significant range of ancient, Byzantine and foreign items including 100 lots of Monegasque coins ranging in date from 1640 to 1974.

Interested collectors wishing further information on the next “Monaco Numismatique” show including dates and events associated with the show should contact the organizer, Editions Gadoury at: – and be sure to make your travel plans in advance for the most opportune prices and availability. Travel to Nice from most cities is easy and made very convenient with connections direct to Monte Carlo just steps away from the main entrance of the Nice International Airport.

** Look out for my person-to-person interview with Francesco Pastrone of Editions Victor Gedoury & organizer of “Monaco Numismatique”coming soon!